Getting Bullish On Facebook's Mobile Ads 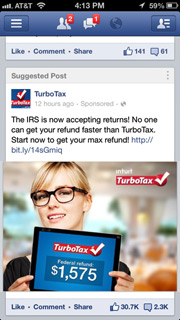 What started last year as a big gaping hole in Facebook’s post-IPO prospects may well have become a growth driver already. According to one of the major tools providers for Facebook ads, Spruce Media, Facebook ended 2012 poised for substantial growth in its mobile ad offerings.

Analyzing over 70 billion ad impressions in 115 countries during Q4 2012, Spruce found that marketers were moving more of the budgets away from low CPM ad placement on Facebook and into higher CPM options within the newsfeed environment. CPMs for newsfeed ads across platforms rose 35% in a single quarter to $5.37, while overall desktop CPMs declined 16%.

Newsfeed ads appearing in mobile devices did see their CPMs fall 10% in the quarter, but Spruce speculates that this has more to do with an increase in available inventory as new devices came to market (iPhone 5) and Facebook expanded the range of devices on which it delivered newsfeed ads.

When it comes to performance and engagement, mobile leads all other forms of Facebook advertising. Average click-through rates on mobile newsfeed ads reached 1.738%, compared to 1.254% on desktop newsfeeds. Overall mobile CTRs improved 34% in just a quarter.

“Facebook is doing a great job of making sure that ads are shown to people who are most likely to be interested in them,” Spruce says in the report. The company contends that Facebook appears to be ensuring a positive user experience even as it ramps up its ad loads.

Cost per click for mobile Facebook ads has declined 35% to an average of $.30 in the quarter, which Spruce believes positions the social network to attract traditional mobile ad network buyers.

Mobile ads in the newsfeed tend to perform differently than those on the desktop. The cost per engagement for mobile is $.76, more than double that of engaging a user on the desktop. But mobile is especially good at driving people to immediate actions such as “liking” a brand. On the desktop users are more likely to browse and discover, especially rich content. “The greater opportunity for Facebook mobile in the short term is to focus on direct response advertisers rather than those seeking awareness,” the report advises.

Facebook’s new Mobile App Install Ad is demonstrating the mobile platform’s strength in attracting immediate actions. The CTRs on these ads are 1.12%, with a CPS of $.39 and a cost-per-install of $.97. Spruce says it expects considerably more activity in mobile app advertising on Facebook in 2013 off of these early, very positive results.

Clearly, the trajectory is positive for Facebook’s newsfeed ads on mobile. From a user’s perspective they seem to be playing around with ad loads. Currently I find the frequency of ads in my feed considerably lower than they were a month or so back. I also notice the arrival of much larger pieces of visual creative in the feeds of late. Each ad I encountered lately fills the screen.

Good or bad? Still as hard for us users to say -- as it may be for Facebook itself.