The Whole Story: Behind The Buzz On Streaming Media 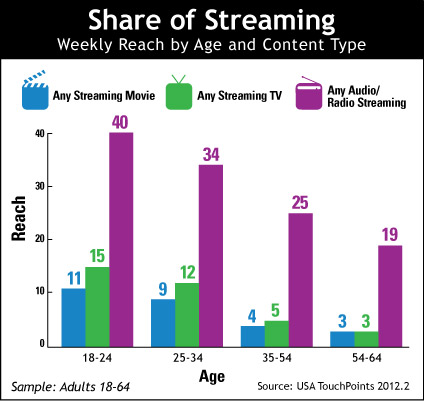 Streaming video has gained significant attention in recent times as the market continues to grow. This USA TouchPoints analysis looks at the extent to which TV, Movie and Radio/Audio content is streamed in the average week by different age cohorts.

Interestingly, the results clearly show that while the majority of industry buzz is around streaming video, in all age groups analyzed, TV and Movies (individually and combined) were outstripped by the total reach of streaming Radio / Audio.

While this may seem counterintuitive to some, a possible explanation may be a plus of audio content -- it does not require fixed attention or even for the individual to remain in place. Also, Radio and any other kind of streaming can be done on the computer while working on the same device -- whether for the purpose of providing background music, sports commentary or other forms of talk-based content.

Services such as Pandora will also account for some of this sector.

The difference between streaming TV Movies was never more than 4% (in the 18-24 cohort) and that difference diminished steadily until both TV and Movies attained the same reach (3%) among the 54-64 year-olds.

Across all three types of content, we see the expectation that younger cohorts will engage more in these sorts of behaviors. The result is that reach among the 18-24 year-olds is highest -- 11%, 15% and 40% weekly reach for Movies, TV and Radio/Audio, respectively. Then, the decline in reach is steady and consistent as we look at increasingly older age groups, with hierarchy of reach remaining constant throughout.