OK, that title has nothing to do with the article itself except for the word “Oreo” -- but along the same lines, neither did Oreo’s Super Bowl commercial have anything to do with its stellar opportunistic play on Twitter following the now-famous blackout, when the brand tweeted a photo with the tagline, “You can still dunk in the dark.”

16,000+ retweets later with a total paid media investment of zero -- and you might be scratching your head, wondering why it was necessary to spend $4 million plus on a Super Bowl commercial at all. Or why Oreo chose to put all of its eggs into the Instagram bucket, as opposed to the seemingly 2013 passé Facebook.

Here’s what we know: Oreo’s Instagram account went from zero (2,000) to hero (almost 22,000) within Super Bowl seconds. Right now it’s sitting on 78,000. In a rather brilliant activation, Oreo used its account to invite Instagram users to tag a photo with its handle @oreo, as well as either #cookies or #cream (actually #creme, but I’ll come back to that shortly). In-studio designers or sculptors were standing by to create a rendering of the photo using either cookie crumbs or cream.

It began with a cookied background and cremed date of 2.3.13 photo and the caption “Are you cookie? Or are you creme? Choose your side and come back Sunday to battle it out. Instagram style.” The post has since had 5,145 likes and 6,168 comments. Clearly a lot of people have an opinion about cookies or cream. 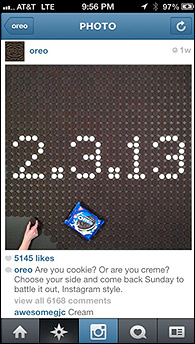 Since then, roughly 150 of these photos have been transformed into cookilism or creamism art (as in pixelism or pointillism, but decidedly more edible.) 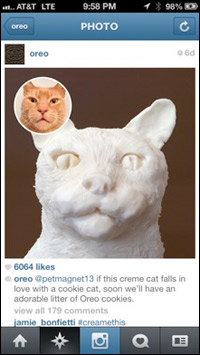 And then about 48 hours after the whirlwind began, it all stopped as quickly as it began, with a photo depicting a gallery of all the creations and the words, “IT’S ALL OVER! The final score: 17,060 tags for cookie, 21,050 for creme. Creme wins…for now. But there’s still lots more coming from OREO, very soon…”

If you’re doing the math that’s potentially as much as 38,000 photo requests all things being equal. It’s a pretty good rough estimate of engagement or a correlation between “follow” (passive) and “request for cookie” (an active RFC).

And so, instead of asking “Why only a few days?” or “Why disappoint so many eager beavers?” I’ll give the company the benefit of the doubt with its open-ended “there’s still lots more coming from OREO, very soon….” but I will be watching very closely and will hold the brand to its promise.

As an aside, it was interesting to see consumers continually use “cream,” versus the brand’s use of “creme.” It made me think of the Lego v. Legos case, without the brand’s stubborn defensiveness.

In the interim, to complete the thought leadership sandwich, let’s go back to the opportunistic tweet. I’m fairly certain the folks over at Oreo parent Mondelez International (a client of mine), were NOT responsible for the blackout. On one hand, this was déjà vu all over again with the spirit of Old Spice’s Isaiah Mustafa living large in a content studio with a team of copywriters, art directors, clients and suits on sugar highs. On the other hand, this showed the power of thinking quickly, being responsive and adapting to pop culture in real time.

Why haven’t more brands done something similar? Many reasons, including the fact it’s extremely difficult to scale and execute such a move with any consistency and authenticity.

Why do so many brands continue to advertise on the Super Bowl without a single call-to-action? Only one in every two commercials even carried a URL, according to ExactTarget’s Jeff Rohrs.

Will Oreo be back in next year’s Super Bowl, but this time without spending a dime on paid media?

So many questions. So few answers.