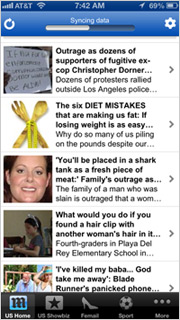 Many publishers have discovered that mobile users hit their sites much more frequently than they do on the desktop. The quick hit occurs for some categories multiple times a day. And as that same user or brand loyalist moves across desktop, smartphone and perhaps even tablet screens, the content provider is essentially seeing that same person in different places and modes of use at various dayparts.

This sequential aspect of mobile access is especially interesting. It means that a media company is not just being "visited" by a user. That use is closer to checking in with the media company. The end result is a kind of daylong conversation.

The Mail’s Publisher Martin Clarke helped conclude this week's Mobile Insider Summit on Saturday with a deep dive into how traffic ebbs and flows across desktop Web, tablets and smartphones. Mobile access spikes first thing in the morning, desktop around noon, and then the device use again begins creeping upward in later afternoon and evening.

When the charts are laid atop one another, it looks like a kind of handoff goes on among users. The Mail is still trying, like everyone else, to get a handle on how many of those same users are accessing the brand across multiple screens at different dayparts.

It seems to me that devices are giving publishers something closer to a conversational relationship with the user that requires different kinds of media and perhaps marketing. Media creation was for many years shaped around some fairly set consumption rituals: morning newspaper reading, noontime Internet news lookups, evening TV newscasts.

The 24/7 news cycles of cable TV and Internet gave us news that always had to be on, and was forever reiterating a breaking news story. For those of us who were always on the Web, some news seemed stale by the time we saw it reiterated on the nightly cable news. Story cycles have become that fast.

The iterative nature of digital content consumption, enabled by smartphone and tablet, invite new ways of crafting and packaging news that better reflect the new conditions of use. Clarke says the next big stage for The Mail’s app will be personalization. It is because the mobile media touches the user so many more times a day that personalization becomes more important.

You need mechanisms that recognize when the user has already been there that day, what he has already read, and perhaps even having the ability to track certain stories that interested him earlier so he can see quickly how it evolved. Clarke says they already can see content tastes shift across the day, with ever lighter fare trending as the day wears on and then peaking at night.

Imagine the possibilities for a marketer to accompany a user on his or her content journey during the day. If devices really help sensitize us to the different moods and modes of the consumer in different places and times ("mindsets" is the phrase that most were using at the Summit), then the tone, language and even performance expectations on the same campaign could be different at various points in the day and on different devices.

It seems to me this changes the nature of the content and forces everyone in the supply chain to think about media as an ongoing daily conversation, not just "touchpoints" or multiple "at bats" or multiple screens. There is a sequential aspect to this kind of consumption that begs to be served. In conversations between people we try not to repeat ourselves, but build on the last thing the other person or we said.

Similarly, giving people simple multi-screen access to the same content misses key variables: their changing context (mood, place, mode of use, etc.) and all the other times they visited you that day.