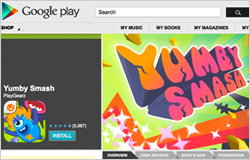 Given Google's infamous love of algorithmic solutions for any problem, I am guessing they have an equation that determines when a privacy controversy involving their services merits a serious rejoinder. So far, the latest dust-up over Google Wallet revealing to app developers their buyers’ personal information seems not to have hit the necessary threshold.

As Australian developer Dan Nolan recounted in the blog post that started it all: “If you bought the app on Google Play (even if you cancelled the order) I have your email address, your suburb, and in many instances your full name. Each Google Play order is treated as a Google Wallet transaction and as such software developers get all of the information (sans exact address) for an order of an app that they would get from the order of something physical.”

When a news reporter at Australian News.com referred to this as a “flaw” in the Google Play and Wallet systems, Google itself objected and asked for a revision that included putting quotation marks around “Flaw.” Yup, it is a feature, not a flaw, Google claims -- and not newsworthy.

In response to an earlier query about this pass-along of personal information, Google actually made a plausible case that for tax reasons worldwide, it had to let sellers know the origin of a sale so it could be properly taxed by respective countries. Unlike the apple App Store where users actually buy apps from Apple, the “merchant of record” in the Google Play Store is the developer himself.

The issue, of course, is transparency as much as it is revealing data. Users are not forewarned in a sufficient way when buying apps that their data may be passed along to a developer whose whereabouts and trustworthiness are unknown. Some developers feel they don’t want to be entrusted with this depth of personal information. Others think this is a non-issue.

If users are exposing their personal information to a third party without fair warning and full understanding, then it is a problem. The point is not that Google is doing anything nefarious here. The point is that their approach to the issue is so cavalier. What I continue to find staggering about both Google and Facebook is their inability to be leaders on the issue of data privacy and consumer control. Yeah, yeah, yeah. They set up dashboards and claim privacy is their highest priority, but no one in their right mind believes them for a second.

Facebook just blatantly goes its own way until it gets called on it. Essentially, it regards privacy as a boundary established by crossing it regularly. Google just tends to wait for the controversy to go away.