The Whole Story: Parents' Average Week On The Web 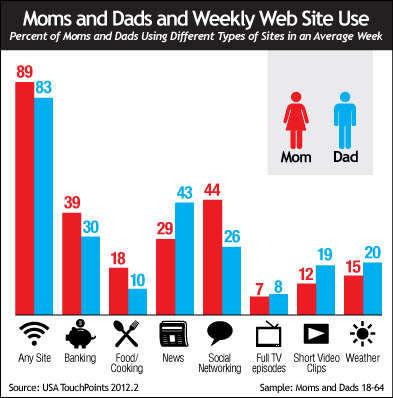 We often see stats relating to Web use among different ages and genders, but seldom any that compare Moms and Dads as opposed to simply men and women.

This USA TouchPoints analysis sought to explore the extent of any differences in the use of various types of Web sites between Moms and Dads in the average week and found there are at least some disparities between the two.

Whereas the vast majority of both Moms and Dads can be found on the Web during the average week, social networking, news and to a lesser extent banking and food/cooking sites all show marked differences in average weekly reach.

The greatest difference (just) is in the use of social networking sites, which is dominated by Moms: 44% vs. 26% for Dads. While the female skew in itself may not be surprising, its extent may be more so. However when considering the amount of other research that points to the same conclusion, the well-documented “Mommy-Blogger” phenomenon and the amount of time many Mothers – particularly those of young children – spend at home, this becomes much less surprising.

When one also considers how many work environments are not conducive to the use of social networks (or in which they are prevented by firewalls), then this also logically contributes to the disparity.

News Web sites almost exactly reverse the disparity between Moms and Dads – this time we see 43% Dad vs. 29% Moms.  Anyone conducting any qualitative research among Moms will have heard of the time constraints that impacts their daily lives. It is likely that outside of major events, this is a factor here. Preference is given to other activities, like social networking, in the time they do have available.

Interestingly, online banking appears to be more the preserve of Moms than Dads (39% vs. 30%), this may again play to time issues and online banking is an easy fix for an essential part of household management.

Two other categories that are interesting in relation to each other are full TV episodes (online) and short video clips.  While the numbers are not large for either, they are equal between Moms and Dads for full episodes: 7% and 8%, respectively). But there existed a much larger gap between the two for short video clips – 12% for Moms vs. 19% for Dads.