Report: ISIS Readying Its Wallet 2.0, For iOS, Too 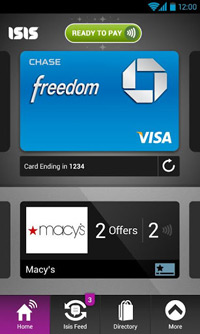 The NFC-powered m-payment scheme from ISIS -- that consortium of wireless carriers, Verizon, AT&T and T-Mobile and a host of bank and credit card partners -- is developing a Version 2.0 of its mobile wallet even as it remains in early testing.

In an extensive report by NFC Times, the industry news source says the group will switch developers and launch a much-revised m-wallet that is simpler, faster and less buggy. The new version will also come in an iOS version in anticipation of third-party iPhone attachments and cases that will add NFC capabilities to existing Apple hardware.

The ISIS project for mobile payments is currently in trials in Salt Lake City, Utah and Austin, Texas. According to NFC Times, the consortium is pushing the effort hard with in-store signage featuring the major carriers that are selling Android handsets with NFC support. The report says that ISIS is planning an expansion of the program later this year, perhaps even going nationwide.

The ISIS mobile wallet is a widget-based model that uses Java to ensure compatibility across Android, iOS and feature phones. Services such as bank and credit card accounts run as widgets within the ISIS app. But the first iteration, developed by C-SAM, has suffered freezes, crashes and an inability to connect with the ISIS SIM “secure element” within the phone. While C-SAM will continue to provide servers for the wallet, the report says, Austin startup Mutual Mobile will develop what is being dubbed ISIS Mobile Wallet 2.0.

ISIS has been tight-lipped about results from its four months of trails in two cities. NFC Times reports that ISIS sales head Jim Stapleton told a recent payments conference they were seeing typical customers use the wallet about five times a week. And in Salt Lake City the most popular use of the NFC-enabled ISIS platform is for tapping to pay on buses and trains for the Utah Transit Authority. Of course, ISIS is encouraging this use by offering its users free tickets on Utah Transit when they use the mobile wallet. So there is that.