Madison Ave. Now Has A Standard To Rival Wall Street's 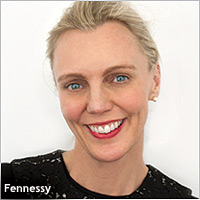 After decades of relying on crude estimates, Madison Avenue finally has real market data akin to Wall Street’s. The data, which is derived directly from the media-buying and paying systems that major agency holding companies use to manage their own data, is based on real transactions, not projections based on third-party cost estimates that the ad industry has relied on to date.

The data comes from Standard Media Index (SMI), a company founded five years ago by Australian entrepreneur Sue Fennessy and former journalist Jane Schulze, who launched it Down Under when Schulze -- then a financial reporter with The Australian -- grew frustrated covering an industry based on specious market data, and teamed up with Fennessy to build a better mousetrap based on real data.

"As a journalist, my best-read stories were always those where I’d interview media buyers to get their view on advertising demand,” recalls Schulze, who is now publisher of SMI, based in Sydney.  “It was the only time media sales directors, investment bankers and pension fund managers would call me (usually it was always the other way around.) But they were all desperate for accurate timely information and knew media buyers were the most credible source as they negotiate the advertising deals and actually book the ads.”
The insight taught Schulze that there would be marketplace demand for real data on media buys derived directly from media buyers’ transactions, but that it needed to be structured and scaled beyond what a journalist could do on her own.
“Gaining intel through phone calls was not sustainable in a fragmented, digital marketplace,” she recalls, adding: “After numerous such stories, it was clear that harnessing the expertise of media buyers would fill a huge data gap. ‘’
Enter Fennessy, a fellow Aussie with a track record for starting and managing successful businesses and a former ad industry executive herself, who founded and sold a shop to Omnicom’s BBDO in 2000. With backing from an Australian investment firm headed by David Kirk -- former CEO of Australian media conglomerate Fairfax Media, and now chairman of SMI -- and a second round from the U.S.’ Allen & Co., SMI has invested about $15 million to date to build the infrastructure necessary to tap into the big agency holding company data processing systems, and harmonize and organize the data in a way that gives the first empirical view of actual media-buying transaction data.
To do that, Fennessy says SMI had to develop tens of thousands of unique codes for identifying and describing discrete media suppliers. To date, she says SMI has developed more than 55,000 of these codes in the U.S. and Australia, and creates new ones to identify and deal with unique media suppliers in each new market it enters. She claims SMI how has 100% coverage of the major agencies in Australia, and a year after launching in the U.S. now pools data from three agency holding companies -- Aegis, Havas, Interpublic and Publicis -- representing more than half of U.S. media-buying transactions. SMI is currently in the process of rolling out in the U.K., and has already developed 20,000 unique codes for the media suppliers in that market, with plans to expand into Western Europe and Asia soon.
While there have been attempts to organize consortia to aggregate real media-buying data in the past -- Interpublic, Omnicom and WPP attempted to launch one called Mediaport in the early 2000s, but it fell victim to the economic recession -- SMI appears to be the first to pull it off.
“SMI data provides visibility into market dynamics at a macro and micro level, giving us better market understanding which empowers us to make more informed investment decisions. It makes us smarter while protecting the proprietary nature of our clients’ spending,” says Frank Voris, CEO of Publicis’ VivaKi unit.
Voris is a big fan not just of what SMI can do for VivaKi and its agencies and clients, but for Madison Avenue overall, because he believes it will lead to greater transparency that will enable good agencies and brands to compete on a more even playing field.
“Clients entrust us with their brands, making us stewards of their ad spend and brand performance in the marketplace,” he explains. “This data gives our industry the visibility we need to better evaluate and validate the investment decisions we make on behalf of our clients.”
In its deals with agencies, SMI basically barters access of their own data in exchange for an aggregate view for the total marketplace. While agencies receive granular data on the shares of their own operations, clients, and brands, no agency- or brand-specific detail data is released or sold publicly.
The main paying customers for SMI’s data, not surprisingly, are the major media inventory suppliers who want a more accurate picture of how they perform against the actual marketplace. While they don’t have access to specific account data from SMI, they can use their own internal estimates, marketplace intelligence, and third-party competitive ad spending trackers such as Nielsen and WPP’s Kantar unit, to factor realistic shares of the overall marketplace, as well as specific agencies, brands and accounts.
“We’re not the whole puzzle,” concedes Fennessy, “but we’re a key part of that puzzle. We provide the aggregate data with no visibility -- no client-level visibility, no agency-level visibility. We sell that data to the financial sector and to the large media owner groups, and the core applications to use it. But it is the ones that figure out how to get it in their own analytic systems that will win.”
Fennessy says SMI is focusing on trying to convert the other major agency holding companies in the U.S. and the U.K. and already has people on the ground in China, Spain, Germany, France and Canada with plans to deploy in those markets soon.
“We want to compete 10 markets by the end of the year, because our technology infrastructure is already built,” she says, adding that most of SMI’s technological investments are based on coding new forms of media and media company suppliers, and developing better analytics and data visualization tools. One of those, a spiffy new tablet and mobile data visualization platform, will be introduced at the 4As annual conference in New Orleans next week (see example below). 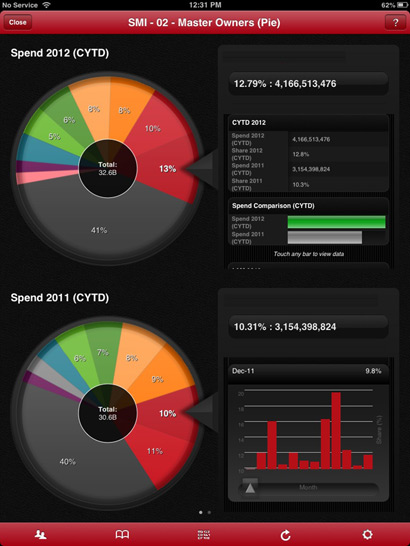 1 comment about "Madison Ave. Now Has A Standard To Rival Wall Street's".
Check to receive email when comments are posted.
Next story loading