In U.S. Ad Push, 'The Guardian' Mobilizes A Divided Nation 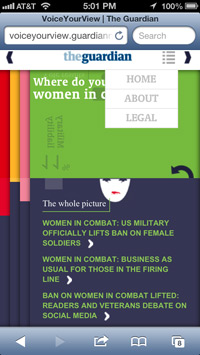 There is an odd British Invasion occurring in the media world of late. The Redcoats aren’t coming per se -- and no, this isn’t another wave of Liverpool taste. This time it is the news industry. Financial Times, the Economist, and the Mail Online have all made important gains among American audiences in recent years. And The Guardian is now mounting its own charge in a novel use of outdoor advertising that is activated both by mobile phones and Americans' infamously divided political and social views.

The Guardian is using a series of posters to visually depict two sides to central political debates (gun control, user privacy, women in the military, etc.) and asking people to vote on their point of view by snapping and sending the relevant image via Instagram or Twitter with the hashtag #VoiceYourView.

This is one mobile activation that goes far beyond the usual snap-and-send QR or watermark campaign. The beautifully and responsively designed VoiceYourView.guardian.com site shows you how the vote is going and then links through to relevant articles from The Guardian. The Director of Marketing and Communications for Guardian U.S. Jennifer Lindenauer states that the campaign is designed to embody a key product attribute of the newspaper -- “open, collaborative and innovative journalism.”

As a mobile campaign it is pretty smart combination of out-of-home creative specifically triggering a mobile action that taps a fundamental American habit, voting and voicing an opinion. It is a call to action that resonates with the user because the payoff is not a discount or a download so much as an opportunity to express. The poster art by Noma Bar is striking on its own, and likely would get attention regardless the interactive element. But it is precisely because the visual art is so engaging that the user is compelled to participate. The campaign was designed by BHH New York.

We wish the voting mechanism were tied more closely to the results Web page so that users did not have to type out a URL to get there. While the campaign wisely uses the two tools most mobile users likely have, Twitter and Instagram, it lacks the mechanism for following through with links that a QR code might deliver.

Still, even as The Guardian in the U.S. exceeds 12.5 million monthly uniques, this is just the first campaign it has launched for itself on this side of the pond. Mail Online is making a big marketing push as well.

mobile, newspapers, out-of-home
1 comment about "In U.S. Ad Push, 'The Guardian' Mobilizes A Divided Nation".
Check to receive email when comments are posted.
Next story loading