Long-Form Branded Videos: Who Has Time To Watch Them? 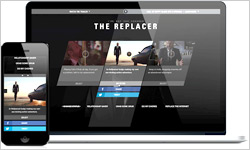 The year was 2008. Bankers were awarding mortgages to any individual whose footwear didn't announce "my current domicile is a mud hut." Lifetime's "How to Look Good Naked" taught an insecure, body-dysmorphic nation how to look good, naked. On the Internet, we reveled in the glory of branded Flash-y sites with embedded video doohickeys. Oh, the techno-pageantry! Clicking on one thing took you to another thing - which, in turn, revealed either another thing or another another thing. In the end, there were many things.

Then brands decided they were cool with video alone, which relegated our little Internet playthings to the scrapheap. Their fate was richly deserved: heck to Betsy, some took as long as three minutes to navigate, which made them the modern-era equivalent of a paginated book. They disappeared overnight, quaint relics of a less attention-deficit-disordered time.

Or at least that's what twitchy Internet people would have you believe. Two new video-centric programs, one from Perrier and one from Activision, beg the question, "Can consumers still be wowed with pizzazzy technology?" In both cases, the answer is "sure!" Alas, the programs also beg a second question: "Who has time for this crap?"

Of the two programs, Perrier Secret Place is more involved from a tech perspective and more baffling from a branding one. The game (the adventure? the mission? the proto-experience?) opens outside a seedy dry-cleaning joint, whose proprietress waves us through to a back room after we hand her what appears to be a steamrollered Monopoly token. The camera lingers on our mysterious wrist tattoo, which isn't a clue… OR IS IT? The guy we meet in the back of the dry-cleaning joint, a carnival barker/cabaret host sort who could use a bath, doesn't provide much information beyond advising us to click on his image. When we do, voilà! We become him and we see us. We have nice hair and an appealingly apportioned skull. Got it? Of course you do.

From then on out, every time we click on a character, we become that character and survey the scene from the new character's perspective. And oh, what characters there are: sexy librarians, sexy roller-skaters, sexy guitar players, sexy bartenders, sexy dancerpersons. Each is somehow intertwined with the next, in a way that only those with an endless reservoir of patience will be able to unravel. In the time I spent trying to figure out what the dickens is going on, I saw the sexy librarian doff her blouse, which prompted the sexy bartender to dunk his face in an icy sink filled with Perrier bottles (all together now: branding!). I witnessed the sexy breakdancer bust several moves of low-grade sexiness. I espied the sexy roller-skater provoke a jealous spat with a sexy interloper, which delighted the sexy objet d'affection.

What I didn't see was anything that resembled a coherent plot or anything that would help me win whatever I was supposed to be trying to win (sez the directions: "5 clues are hidden at the party. They will help you find the Golden Woman and the secret Perrier bottle. Find them and try your chance at winning tickets to one of the world's craziest parties." Whuh?). There's an app and additional clues on Facebook. In conclusion, I do not feel that I received a satisfying return on my temporal investment of 35 minutes, and will spite-drink Canada Dry seltzer instead of Perrier from now on.

I don't have the same problem with Activision's "The Replacers," a higher-concept-than-the-subject-matter-demands teaser campaign for the next game in the "Call of Duty" series. The bit is that we, the first-person-shooter-playing citizens of Planet Earth, need to free up some time for "Call of Duty" duty. Enter the Replacers, a pair of dark-suited mercenaries - think The Wolf from Pulp Fiction, minus the focus and competence - who will handle everyday responsibilities for gamers as they play away. The trailer has a few inspired bits, especially boyfriend duty (holding handbags outside a waiting room) and a quick weathercasting stint (one replacer ogles the anchor, the other warns of "swamp ass" conditions in Atlanta). The game clips, which promise "magma" and "vertigo," are similarly right up my juvenile alley.

It's the rest of the campaign, especially its aggressive social-media component, that feels extraneous. The site offers a bunch of short clips in which one of the Replacers deadpans about brunch attendance, LOL-worthy web videos and more. There's also a location-based component, in which gamers who seek to pass off, say, dog-walking responsibilities can be connected with a Yelp listing for dog-walkers in their area. It's smartly detailed and well thought-through, but who cares? After clicking on a few clips and being bludgeoned with 74 PLEASE OH PLEASE SHARE THIS VIA SOCIAL MEDIA come-ons, boredom kicks in something fierce.

So is there still a place for web tchotchkes like "The Replacers" and Perrier Secret Place? I dunno. Maybe-ish? They don't come cheap, in terms of time or resources, but there's so much video out there that quickie experiences of this sort can help distinguish a brand or product. It'll be interesting to see how (or whether) such programs translate onto mobile devices in the future.

online video, video
3 comments about "Long-Form Branded Videos: Who Has Time To Watch Them?".
Check to receive email when comments are posted.
Read more comments >
Next story loading