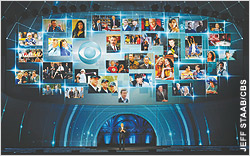 When it comes to announcing their annual fall schedules,do the big broadcast networks really need to continue producing massive presentations and throwing gigantic parties during what has long been known as upfront week? Or have digital media and social networking eliminated the need for such old-school largesse?

On the one hand, if the primary purpose of an upfront week presentation is to inform advertisers and the press of a network’s plans for the upcoming television season, it would seem that such events have in recent years become largely unnecessary. Interested parties now have all of that information at hand at least a day before the events, and sometimes earlier. Those individuals include television viewers and fans that used to be the last to know about the networks’ fall offerings but are now as well informed as anyone working in or around television, especially when it comes to announcements about forthcoming programs and schedules. That’s because the networks release that information to the press before the events, and it is instantly transmitted to the public at large. Additionally, reporters at certain media and entertainment Web sites begin posting this information days or weeks in advance, as deals for new and returning shows are closed on the studio level and arrangements are made for talent from those projects to travel to New York for upfront week.

Some networks augment this early information discharge by posting clips from new shows on their Web sites in advance of their presentations. These are often the very same clips that are shown to advertisers on giant high-definition screens at Radio City Music Hall, Carnegie Hall or another outsize New York City venue. As a result, many of the attendees at these events already know most of what they are about to hear and have already seen much of what they are going to be shown.

This is a dramatic shift from the upfront week experience of old —old being defined as pre-digital. As recently as the ’90s, most people walked into upfront events with only a general idea of what would be announced. Newspapers and daily trade publications would publish best-guess schedules based on information from the previous day, but they were rarely accurate. The atmosphere inside those venues was electric, especially if the presentation was well-produced and the clips from new shows caught on with the audience. In fact, the only way a presentation could truly fail was if it ran too long.

Today, the networks make a concerted effort to keep their presentations fast-moving, and most of them run between one and two hours in length. But in the old days, before the audience was digitally empowered and ready to tweet snarky comments about an overly long production, these events could drag on for hours. Occasionally, a network would make the mistake of including an entire pilot of what it considered to be its most promising new comedy or drama, extending its presentation by up to 45 minutes and rarely generating good will in the process. Just ask anyone who was forced to sit through the pilot for the long-forgotten newsroom drama WIOU at CBS’ presentation back in 1990.

Of course, even the longest broadcast upfront presentations were somewhat easier to take than they are today, because they weren’t crushed together in the space of four days along with those of so many cable and Spanish-language networks, and they didn’t come at the end of three months of cable upfront presentations and parties. Indeed, back when there were only three upfront presentations, for CBS, NBC and ABC, and even when Fox was added to the mix, they weren’t necessarily even scheduled in the same week. There was plenty of breathing room between them. Today, those four overloaded days have for many become a punishing marathon, more an endurance test than an informational and educational opportunity.

An informed audience is not necessarily an enthusiastic one, and that’s where the value of a strong upfront presentation still comes into play. Given the competition for advertising dollars and press attention, not to mention viewers, it still makes sense for networks to do everything they can to propel their properties to the forefront and leave advertisers and journalists wanting more. It’s one thing to read about CBS’ new schedule on your smartphone and watch a few clips on your tablet. It’s quite another to be seated in Carnegie Hall, long the home of CBS’ annual presentation, surrounded by advertising, network and studio executives and the talent from the network’s current and future shows, watching those clips on a breathtaking high-definition screen and taking in what is always an extraordinary showing by the network.

All of this celebration and exposure can work against a new show if its clips indicate that it isn’t one of the network’s best. Sometimes that is immediately clear to everyone but the network’s own executives. (To cite just one of countless examples, how did NBC not see the looming disaster that was Animal Practice, the freshman comedy last fall that starred a monkey, when everyone at its upfront presentation couldn’t help but see how utterly inane it appeared to be?) But risk has always been a big part of the network game, at least where program development is concerned. Better to look at the positive aspects of the traditional upfront experience, especially as they are typified by some of the more successful presentations.

Looking back over almost a quarter century of upfront week events, which has included large-scale successes and unforgettable failures by each network along the way, two memories stand out: The presentations by The WB at the Sheraton Hotel in midtown Manhattan, and NBC’s decision a few years back to forego a formal upfront presentation of any kind in favor of intimate agency meetings. The WB is long gone, having merged with UPN in 2006 to form The CW, but happy memories of its upfront presentations remain. The WB didn’t so much present its programming as immerse its audience in an environment in which everything that the network had done and had planned to do was made to seem even more stimulating than it actually may have been. The WB had its problems along the way, but it was second to none at generating interest in its shows and stars among advertisers and members of the press.

As for NBC, its attempt in 2008 at removing itself completely from the traditional upfront week structure, choosing instead to have small meetings with advertisers and the press beginning in early April of that year, was widely panned. It was simply too dramatic a change for the industry to get behind.

And so it is that the networks now find themselves caught between the expectations of the old and the realities of the new. It’s no longer enough for a presentation to serve as a glorified announcement. Instead, the presentation —and, arguably, the party that follows —must serve to generate interest within the business and provide insight and context into brand, strategy and programming alike. That’s the only way to separate the upfront experience for advertisers and the press from what is now an outpouring of new, context-free information directly to the viewing public.