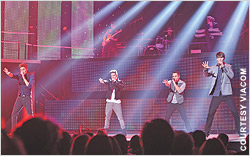 The last upfront presentation I attended was a Nickelodeon breakfast-palooza three or four years ago. I went with my wife, who had a valid professional reason to be there. Mine was of a more earthly nature: I was in the neighborhood and had a hard-core hankerin’ for hotel-buffet-caliber eggs. Also, the featured entertainer was one of the network’s litany of triple-threat starlets (acting/singing/reputation management). When iCarly — or Zoey 101 or True Jackson, VP, or whoever it was — comes a-knocking, you answer that door, friend. You answer that door.

So you can imagine my excitement as I backed the football-girthed omelet onto my plate. Media! Food! Song! It was like a Renaissance Fair, but with fewer Drench-a-Wench booths and more impenetrable market research. Surely I would be delighted into allotting the totality of my nonexistent ad budget towards a brand-redefining presence during the breaks of The Naked Brothers Band.

And then cataclysmically disastrous tragedy struck: an exec approached the mic, cleared his throat substitute-teacher-style and announced that the featured entertainer had called in sick, or at least slightly hoarse. You could almost hear all the media buyers in attendance start yanking their ads from Team Umizoomi. It seemed possible — nay, probable — that Nickelodeon would lose its low-digit slot on every major cable provider’s basic tier before brunchtime rolled around. Natasha Bedingfield gamely filled in as entertainment, singing her “Pocketful of Sunshine” as if the room hadn’t just been smacked by a comparable weather-event metaphor, but the damage was done.

Or not. Mostly the upfront-saturated media drones shrugged and bantered pleasantly with one another. Some checked their BlackBerrys. The second the Nick presentation ended, they rose from their seats absently and plodded en masse to the next network confab, one of three can’t-miss klatches scheduled for that very day. They didn’t seem bored or disgusted or sad. They were just going through the motions, not unlike the average factory grunt.

Unsurprisingly, then, my lasting takeaway from the morning was this: There is precisely no reason for upfront events of this sort to exist.

Maybe there was 15 years ago, when there were only a handful of the darn things and media buyers had to joust for coveted NashBridges ad inventory. But today, when every broadcast or cable network move that matters is leaked and/or telegraphed weeks in advance of the upfronts? When there are close to 100 such shindigs on the slate, once you factor out-of-home, radio and other entities into the mix? And when there are about as many cable networks as there are days of the year?

Who has the time? Who has the will? The average buyer’s resources would be better spent reading the online TV trades, making a few extra one-on-one visits and flipping a coin (“heads, I advertise on Utilisima. Tails, it’s Chiller”).

None of this is to pick on Nickelodeon, which was far more of a gracious host than the occasion demanded, nor to dump on the attendees, who were largely there because their job description said they had to be. No, it’s to call for a major-league reassessment of the upfronts. To that end, here are a few suggestions, proffered by some of the industry’s most-bored veteran upfront attendees, to remake upfront season into something remotely useful for media folk, not to mention interloping idiots (raising hand).

Start with the question, “Why bother?”: Unless you’ve got an answer other than, “Because we always have” or “Because if we don’t, someone else will and then I might have to explain it to my boss and I think she’s got a nephew who is eyeing my job,” it’s time to cut the cord. If you can answer that question in another way — say, with “We’ve got a metric ton of branding initiatives, new programming relationships and a possible breakthrough on a cure for baldness to announce, and we’d try everyone’s patience if we reveal it piecemeal” — bully for you. Then…

Make sure that you’ve got real news: The whole “yoo hoo! over here!” act gets grating when 65 other media entities are echoing it. Yes, it’s never unwise to let your core clients know you still exist, and yes, it’s probably not the worst idea to alert both buyers and sellers that bartering season has arrived. But if you’re not sure whether a certain set of announcements can sustain attendees’ interest through an upfront gala scheduled to occupy an afternoon-long chunk of temporal real estate, run it by your critical-minded journalist pals. Not me, though — I call for 32-point front-page headlines every time VH-1 comes to terms with another saucy Basketball Wife. They’re so saucy! Still with me? Terrific! Next, you should…

Take whatever packet of research you’ve prepared for the occasion and trim it down by 85 percent: In context, numbers are fun. Educational, even. But when you throw 300 different statistimical nuggetrons at an audience during a three-minute PowerPoint blitzkrieg, those numbers will cease to have any meaning. It’s better to tease the audience with two or three surprising findings (“we own Aleutian males 18-34”) and suggest that there’s more where that came from. I believe this is known as either foreshadowing or bluffing. Same difference. Anyway, once you and your industrial-grade paper shredders clear that hurdle…

Find an event planner that’s either on the cutting edge of whatever event planners are event-planning nowadays — or a complete mental patient: Would-be sippers at the advertising trough have attempted to charm buyers with better food. They’ve tried hipper venues. They’ve tried Aerosmith, probably. None of it has worked; the events mostly remain indistinguishable from one another. And while recasting upfront events as strictly social gatherings makes some sense — everybody enjoys seeing their professional peers from time to time — the notion would lose luster if 80 such events are similarly reformatted. I don’t have the slightest inkling of a clue of an idea how to solve this problem. But as a one-time upfront regular and lapsed chicken finger aficionado, I can say this: Be different, or be gone.