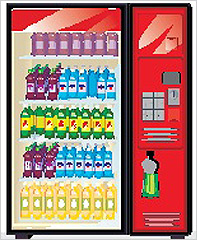 Loyalty programs around small-ticket items may push mobile payments along.

Big retailers and brands have long used loyalty programs to entice and reward their best customers.

Many reward coupon programs have been integrated into mobile apps so shoppers can see their rewards when most relevant, such as when they’re in a particular store.

But rewards for loyalty to small-ticket items have hardly been at the top of most loyalty reward program lists.

An interesting experiment is about to hit the vending machine market with consumers being rewarded for using a mobile wallet.

The mobile payments program Isis, a joint venture with Verizon, AT&T and T-Mobile, is rolling out the program in its test markets with USAT’s 100,000 cashless payment terminals using NFC (near field communications) technology.

The general idea is that consumers get points or credit for using their mobile wallet (Android only, of course, since Apple doesn’t yet buy into NFC) at vending machines.

You get enough points, you get a free vending machine product, like buy four, get one free, that sort of thing. The idea may just be ready for the masses.

Smartphones out-shipped feature phones worldwide for the first time in the latest quarter, according to new data from IDC. Additionally, the number of NFC-enabled smartphones is projected to pass 500 million next year, according to ABI Research.

This means more consumers will have the capability to tap into vending machines with  smartphone payments.

Of course, putting coins or a dollar bill into a machine may be considered just as easy as using a phone to pay, which is where the incentive comes in.

Consumer data from cash transactions at vending machines hardly falls into the realm of useful consumer insights. But when a consumer gets credits toward free vending machine products like Coke, Pepsi, Doritos or M&M’S, it may cause that little tilt to using mobile rather than cash to pay.

We’ll have to see how this plays out, but it may be loyalty and rewards around those small-ticket items in vending machines that get consumers to reach for their phone rather than cash.

Smartphones are going to be everywhere. Vending machines already are.