You know that owned media has arrived when journalists start taking shots.

Pew Research’s State of the Media 2013 kicks off: In 2012, a continued erosion of news reporting resources converged with growing opportunities for those in politics, government agencies, companies and others to take their messages directly to the public.

The Pew study makes communications sound like a zero sum game, tracing the “erosion” of American journalism to organizations increasingly turning to owned media. By the way, someone might want to alert the good folks at Pew that those politicians, government agencies and companies are often communicating journalistic-grade stories, not mere messages, to their target audiences.

It’s all part of a conspiracy to sidestep those pesky reporters, according to Rem Rieder from American Journalism Review in a recent USA Today editorial.

I don’t think so.

Owned media faces the same challenge as any publication. Relevance is just the ante to play the game. If you’re not fresh, provocative, informative or useful, the content goes ignored. People won’t read drivel --  you can quote me on this.

No one understands this dynamic better than Team Obama. The White House participates on every social platform with a pulse, 17 at last count, with Tumblr being the latest addition to its arsenal. Homegrown media supports every presidential speech. With its army of analytic quants, the White House knows precisely who’s clicking on what and why.

It’s only a matter of time before we read that the White House has poached a brainiac out of BuzzFeed to advance its owned media game.

Thanks to the wonders of “small data,” we can predict what a newly created owned media asset would look like if the White House did indeed hire a BuzzFeeder.

Please keep in mind that the following reflects a simulation (+ or – probability of 83%): 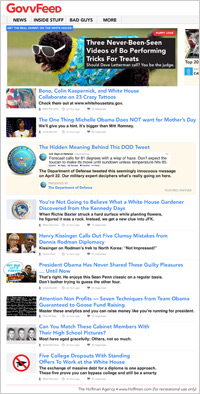 Some takes on the property –

·  Every American wants “the real skinny.” Brilliant empathetic tagline for reaching the masses.

·  Given the White House’s never-ending quest to bring out the administration’s humanity, it makes sense that the family dog should enjoy a more prominent role in the public eye.

· Think of JFK as presidential click bait with likely repeat appearances on the property.

·  Sponsored posts would have a place in the BuzzFeeding of the White House. As you can see from the Department of Defense example, sponsors would come from other government agencies with the option to write about themselves. Market forces -- no one reads dull stories -- ensure a modicum of storytelling.

·  As you would expect, real-time data feeds the GovvFeed editorial team. If one particular story is running hot -- say, the Kissinger slam of Dennis Rodman -- they can quickly roll out a series of stories that might range from a visual timeline of Rodman’s hairstyles to other celebrities who have tried their hand at diplomacy.

Before you say such parody would never come to pass, consider Fortune’s decision to tap owned media dollars with its Original Trusted Content concept. Who could have predicted that Fortune, for a price, would turn the crank to feed content marketing?

Flipping the table, it’s logical to expect organizations like the White House to increasingly borrow from the mainstream publishing world.

Will the White House eventually push things too far?