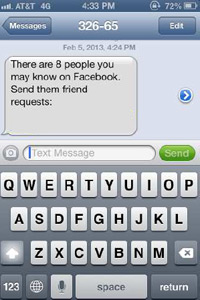 A Web user has sued Facebook for allegedly sending her an SMS message suggesting that she send “friend” requests to other users.

Illinois resident Darya Ivankina alleges in her potential class-action lawsuit, filed this week in U.S. District Court in the Northern District of Illinois, that the social-networking service violated the Telephone Consumer Protection Act by sending her cell phone an unwanted ad.

That law prohibits companies from using an automated dialing service to send SMS messages to people without first obtaining their consent. The Telephone Consumer Protection Act provides for damages of up to $1,500 per text message.

Ivankina says she received a message from Facebook on Feb. 5, urging her to send friend requests to eight other Facebook users. Ivankina's lawyer, Lake Forest-based William Sweetnam, says his client never gave her permission for Facebook to send messages to her cell phone.

He adds that Facebook -- apparently coincidentally -- sent Ivankina a similar message on Wednesday, minutes after she filed the lawsuit.

It's not clear whether Ivankina is alleging that Facebook intended the messages for her, or for another recipient -- as could occur if she was using a reassigned phone number.

Facebook didn't respond to a request for comment, but the company's settings indicate that it doesn't send SMS messages unless users affirmatively enable a messaging feature.

If Facebook actually sent Ivankina SMS ads without her consent, the company potentially could face liability even if it made an honest mistake. A federal appellate court in Chicago recently ruled that a debt collector who called the wrong recipients could be sued for violating the Telephone Consumer Protection Act. In that case, the recipients who sued were using reassigned phone numbers; the subscribers who previously had those numbers apparently consented to receive the calls.

Facebook isn't the only Web company to face litigation under the Telephone Consumer Protection Act. Path, Google and Yahoo all have been sued recently as well.

Last year, Google agreed to pay $6 million to settle allegations that its social apps company Slide violated the law. That case was brought by Nicole Pimental and Jessica Franklin, who alleged that Disco (Slide's group messaging app) used an automated dialing service to send SMS messages to people without first obtaining their consent.

U.S. District Court Judge Yvonne Gonzalez Rogers in Oakland, Calif. will hold a hearing on Tuesday about whether to grant the settlement final approval.