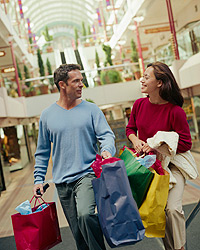 Mobile apps relating to loyalty programs may give retailers an edge over showrooming.

Deep inside a new study analyzing how brands connect and build loyalty with their customers is an interesting piece of mobile commerce insight.

The 2013 Maritz Loyalty Report just out comprised a survey of 6,000 consumers involving loyalty programs at retail, grocery, credit cards, co-brands, travel and hospitality and found the average member is in seven programs.

While 9 out of 10 consumers want to receive communications from their loyalty programs, it was the mobile attitude data that caught my eye.

The study found that 91% of loyalty consumers are likely to download the loyalty program app and that 73% of smartphone users are interested in interacting with their programs through their mobile devices.

The relevance for mobile commerce is that of all the loyalty programs in the study, retail has the highest program penetration. The implications for mobile are obvious: mobile shoppers want to interact with the retailers they like via mobile apps from those brands.

While many shoppers still use websites from their phones in store, the opportunity for retailers may lie in apps, at least for their loyalty members.

Some companies, like Staples, already figured this out, by offering free Wi-Fi, in-store scanning and deals through their app.

For loyalty customers, the big opportunity for retailers is in mobile communication, since mobile can add relevance and context. When a shopper taps into a retailer’s app in-store, the retailer has the opportunity to provide location-based information and offers in context.

Not stated in the study, but it turns out that a majority of loyalty members said it would be “cool and exciting” for brands to send them deals based on their locations at stores, Scott Robinson, author of the Maritz study, told me today.

Only a little more than half (53%) of consumers in loyalty programs say the communication they currently receive is relevant, indicating that much communication is wasted.

Mobile is not the only way to reach loyalty customers but it certainly is one of the most critical ways. Almost half of loyalty members want to receive communication from three or more channels.

Any retailer leaving out effective interactions via mobile loyalty apps could miss an enormous opportunity.