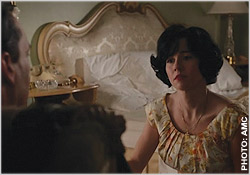 Beware the Weiner doctrine: It seems that any unexpected bit of sunshine, energy or pleasure offered one week inevitably brings a downpour of existential gloom and disorientation the next.

But we’re hooked. We’ve entered into an S & M relationship with Mad Men show runner Matt Weiner. We get our necks snapped going from dread to hope week after week, but he never gives up dominance.

The episode resonated with recurrent themes: loss, control, the idea of home, leaving or finding it, and the feelings of relative safety, warmth and acceptance found within, all rooted to the need for Mommy.

So it goes with Don, or shall we call him Dom?  He enters into a truly distressing (and considering the news in Ohio, badly timed) dominant/submissive relationship with his mistress Sylvia.

Because whether sabotaging others in business or subverting his own personal happiness, deep down, handsome and dashing Don Draper will always be the neglected, motherless child Dick Whitman.

The episode starts in that familiar vertical conveyance, an elevator, with Don overhearing his Lady of the Sacred Babushka shouting at her hubby, the formerly sainted Dr. Rosen. "Tell them how you don't listen to anyone because you have it all figured out," she says, which would seem to apply to her adman lover as well. 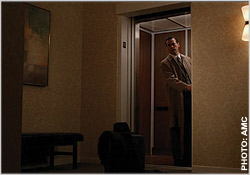 She’s cutting him down, telling him he’s selfish, that he never took care of her. Apparently, hubby’s all packed and ready to move to Minnesota  (the Mayo Clinic?) while she’s throwing her weight around at home. Moves happen fast on this show.

Indeed, within a few weeks of the spur-of-the-moment oral agreement between Ted and Don, it’s, as Ted C. puts it “the first day of school." The two agencies are merging under one roof in the not-exactly-welcoming Sterling Cooper offices.  Some of the kids have their pencils sharpened to a fare-thee-well, while substance and behavior problems emerge immediately in the schoolyard.

Everybody’s discombobulated and things are topsy-turvy.

“Do you know where you’re going?” Ted asks Peggy. Burt Cooper, meantime, welcomes the new agency by praising it for winning a Clio for a “Little Headaches” commercial for St. Joseph’s “aspir-ine.” (Saint Joseph is the patron saint of workers, by the way.) 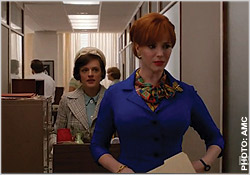 No matter how much praying goes on, however, the women sense a familiar pattern. Peggy asks Joan how her boy is, and Joan tells her “he’s all the man I need.” Meanwhile, Joan returns the question, and Peggy responds with info about the building she bought with (or not) to live in with her manchild Abe. They seem to agree that amid all the chaos, nothing has changed at the agency overall: Women are not penetrating the inner sanctum of male power.

But not all the men are being rewarded. Pete finds himself chair-less, and gets interrupted and called home, where his demented mother has landed. Although she’s not in her right mind much of the time, she’s lucid enough to sense that he is no longer with Trudy, and that he is a man without a home, professionally and personally.

Many will be fired for redundancy—and the employee counterparts and doubles are amusing. Jim Cutler, (Harry “Power Eyewear” Hamlin) whom Peggy described as “Roger with bad breath” has seemingly hit the Just for Men; his striking white/gray hair is now an unexceptional shade of brown.

But speaking of Roger, he’s back with the zingers. He had some of the laugh-out-loud lines of the night, such as: “You’ve got your creative: Peggy, Beany and Cecil.”

Roger shocks head of accounts Burt Peterson by having the audacity to fire the poor guy for a second time. “You’re a real prick, you know that,” Burt says. “Damn it Burt, you stole, my goodbye,” Roger responds. 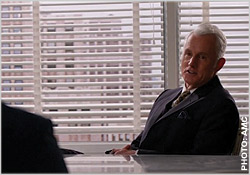 Earlier, in a brilliant little piece of writing, Peterson had called Don “the same cold fish.” Later, when Don tries to drink Ted under the table to show his dominance, Ted mentions the he should eat something, and cold Don says, “Doesn’t ice count?”

Peterson mentions “the worm turning.” And this sets up the possibility of a revenge scenario for so many of the players. Certainly, Peggy has to dress down her former boss for acting like such a jealous child with Ted. “Move forward” she tells him, mirroring what he had advised her all those years ago. But he’s really stuck. Don’s really dickish side emerges as he begins a pissing contest with Ted, who is an honorable guy.

I do love when the show gets off the existential horror grind to go back to showing how advertising is created. For the Fleishmann margarine account (the fakest of fake things), Don goes back 1930s-style verities: the farm table, flapjacks, yellow eggs. He mentions Dorothea Lange, who took photos during the depression, the famous Dust Bowl mother and her starving children. 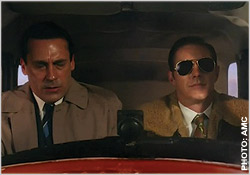 Whereas Ted, despite the penchant for using embarrassingly groovy lingo, goes to the more modern and enduring pop-cultural references of Gilligan’s Island. Parkay is the professor. Are you a Ginger or a Mary Anne?
Don is losing it all around.

Early in the first day, he gets called away by amore. Sylvia pulls a Draper, and calls him and tells him “I need you and nothing else will do.”

Owing perhaps to having overheard Sylvia’s scolding tone towards the doc earlier, he sets up an S&M scene at the hotel right out of the movie Secretary, except Sylvia refuses to crawl on the floor for his shoes.

He leaves the nooner, but has her hold tight in the room, nude and not moving, while he and Ted fly upstate to see the Mohawk client. He even takes her book away—"The Last Picture Show." (Among other story lines, a desperate older woman finds love with a young student. Shades of Joan’s possible romance with Benson?)
Meanwhile, the scene in the plane looked so fake, it was like watching a 1930s movie of people driving in car, with only the backdrop moving.

Riding shotgun, Don is actually a nervous wreck, sick and sweating by the time the sun comes out, and Ted lifts the tin can of a plane above the clouds. Ted the pilot wears a cool flight jacket and dons aviators, smiling a toothy, Kennedyesque grin.

He explains that you can be turned around and upside down and not even know it sometimes. “Gotta watch your instruments,” he says, evenly, and Draper knows he’s been outplayed. 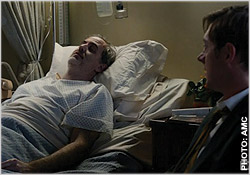 Similarly, Sylvia promised Don that she could wait “standing on her head upside down” for Dom Don to return.
But perhaps he shouldn’t have taken away Sylvia’s reading material. Back in the hotel room, stripped of all else, the devil in the red dress (and remember she gave him "Dante’s Inferno" for light reading on vacation) had too much time on her hands.

She dreams that Don dies, and her Catholic guilt kicks in. She puts an end to their role play and the whole affair, saying she is ashamed, rather than satisfied. Don is reduced to begging her to stay, tears in his eyes. He does that submissively creepy kissing-her-hand thing that he did with Peggy after she left him. She resolves to “go home” and make love to Arnold.

Amid all the domination and humiliation, I really loved the scene between Ted and his dying partner Frank Gleason. It was beautifully acted and written -- the anti-Don and Ted, these two have a genuine friendship based on mutual respect. The dying partner’s advice was exactly right: “If I wait patiently by the river ,the body of my enemy will float by. ..” he tells him about Don. “Give him the early rounds. He’ll tire himself out. Go home. Shower. Walk back in like you own half the place.”

Meanwhile, wet from the rain like a mangy dog,  unhappily sharing an elevator with the woman who dumped him, Don goes home to Megan. She is animated, and full of plans, suggesting they go back to Hawaii on vacation, in the hopes of resurrecting the marriage. Don just stares at her mouth moving, not hearing a thing. 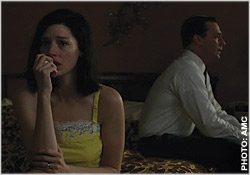 It’s a reference to when he watched her silent screen test last year — and realized that he didn’t love her. Obviously, Megan has no idea that Don was lost in hell, reading "Dante’s Inferno" while in Hawaii, or that he created that ad showing a man getting lost in the sand and disappearing there. The suggestion to him equals death.

The last scene is wonderfully shot — the episode was directed by John Slattery. Megan is wearing a buttercup yellow (as opposed to margarine-colored) nightie, in tears, stationed in front of the TV set at the news that RFK had been assassinated. “They’re shooting everybody,” the demented seer Dorothy Campbell has said to Pete earlier.

As Megan cries, seeing the awful image of RFK lying shot on the floor, Don, who is dressed for work, stands behind her, in a nether zone, not responding to her or the news.

Over the credits, the song “Reach Out of the Darkness” by Friend and Lover (“I think it’s so groovy now/ That people are finally getting together…”) gets mashed with the audio of the news of Kennedy’s assassination.
Don is lost. As we’ve learned from the show, no one in life truly has control (except for Matt Weiner).