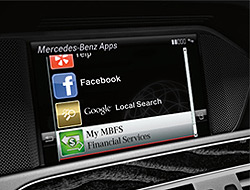 The in-car extension of mobile media raises a whole new set of issues about the relationship between content and context. What kinds of media are appropriate -- or even safe -- to have in that center dashboard console will be a growing question. All of this further motivates Google and others to work even harder on their self-driving cars, of course.

Some executive at the great search engine was quoted admitting that the connection between the Google car and the rest of its business was just that. The less time you need to focus on driving, the more time you can spend searching and consuming media that involves Google. They may really mean that -- and you can see how that matters as in-car networks become more robust.

One thing I’m not so sure I want to know about in the cockpit of my expensive and highly leveraged luxury automobile is how much I still owe on it, however. But Mercedes-Benz Financial Services sees this as a real service. They announced this week the availability of in-vehicle account management via an app. It is dubbed My MBFS, which pretty much ensures that it will be endearing to no one.

To be fair, the company claims that the development of an in-car app follows logically from the usage patterns it is already seeing to its mobile application. It has had an iPhone app since 2009, and launched a mobile Web version of its site in 2010. The company says that more than 20% of account management now is occurring on mobile devices, with up to 1000 customers logging in each day via mobile either to make a payment or to check on account information. They say that the last three years they have generated more than $150 million in payments over these mobile channels.

On the other hand, do you want your car to be in the position of telling you that you are behind in your payments, deadbeat, pay the hell up?