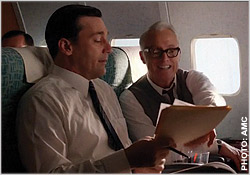 h, oh. Whenever I hear the phrase “L.A. trip” combined with “Don,” I reach for my revolver. Flashbacks! Sadness! Pools!  Suits! Weirdness! Anna!

Doubly unfortunate, the title of this episode is “A Tale of Two Cities,” referring to one of the few works of Charles Dickens that is relatively humor-free. The two cities are not only physical (NYC and L.A.; Chicago also makes its appearance), but also dualities of life and death, us vs. them, Easterners vs. Westerners, and the idea of conformity, and following the rules vs. revolution and revolt.

Dickens' opening line, “It was the best of times, it was the worst of times,” fits neatly into MM’s duality theme, which this season has been run into the ground and pulverized like a British ankle at a company Christmas party. 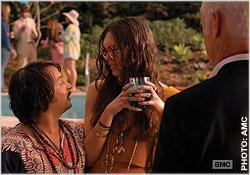 Obviously, we’ve been getting a tale of two Dons for the entire series, and his ever-changing incarnations from episode to episode start to get wearying. (That goes, too, for his incarnation while meeting with the scary Republican Dutch Reagan-saluters at Carnation.) He’s trying to be a good husband, and do his job, but the passion is gone. Nothing is particularly lighting his fire at work, either, so we get Donnie Darko vs. Donnie Downer.

The opening scene, with Don and Megan in their living room, in which she “jokes” that marrying him was the worst mistake she ever made, and his little volley in response, that he hates actresses, is obvious truth buried in an attempt at cutesy/hostile couple humor.

Last week’s episode was all about doors, and we get some of that this week too, with discussion about the naming of the agency. (If the name is super-long, Don suggests, “make the door bigger.”) We also got Avon calling, door- to-door. (Ding-dong!) 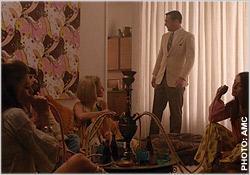 ohn Slattery directed, but still had time for Roger jokes. I didn’t enjoy the getting-kicked-in-the-balls thing that much, and wondered why he was so hostile toward little Daniel, who looked like a caricature of the Paul Simon record producer character at the party scene in Woody Allen’s “Annie Hall.

After overindulging on the “nipple” of the hookah (as if Don needs encouragement to find a mother anywhere, even in a hookah pipe) he has the realization, spoken by the ghost of Private Dinkins, "Dying doesn't make you whole. You should see what you look like." (Meanwhile, as part of Weiner’s continuing limbless fetish, the poor fellow has lost an arm.)

I loved the blonde Pucci-clad hostess whom Don snogs, and the Megan lookalike coming out of the pool.  (Don had a similar experience at a hotel bar seeing a Betty lookalike on one of his past trips.)

But some of the hippie stuff at the party felt corny and fake. I realize it was a different time, but still it freaks me out for Roger, in the clothing of Thurston Howell III, to come on so strongly to Lotus, a tripping teenager.

I started worrying that the Megan/Sharon Tate Internet rumor were coming true (that she would be murdered a la Tate), especially when the ghost of Megan shows up pregnant and says she’s quit her job. Free of work obligations, willing to share him, that’s the way Don wants her: compliant, barefoot, and pregnant. 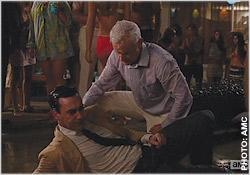 The death metaphors float by until we get to see Don the dead man floating on top of the pool, a direct reference to Don’s ad for the hotel in Hawaii, and “Sunset Boulevard.” It‘s as ominous as the sound of Don’s cough when he’s coming back on the plane.

En route, Roger gets off some Sterling’s gold to Don: " New York is the center of the universe”  he tells him. And “my shrink says, the job of your life is to know yourself." I guess this is ironic, as Roger seemed particularly clueless and out of his element in the West.  Earlier, he urged Don, “Be slick, be glib, be you!” which was exactly the wrong advice -- some kind of lazy-Roger version of the hollow motivational sales pitch that Bob Benson was listening to in his office.

Since New York City was actually declining at the time, with L.A. becoming the universal center of entertainment, too bad Roger is not being a realist -- like the way Woody Allen put it, again in "Annie Hall":  “Don’t you see the rest of the country looks upon New York like we’re left-wing, communist, Jewish, homosexual pornographers?”

For me, the highlight of the episode was the interaction between Peggy and Joan. Joan is leaning in, baby! I was actually shocked that she rejected Ted’s orders and took the client meeting for herself. But in the context of missing out on the media job all those years ago, and her role of glorified office manager ever since, she’s answering the doorbell of opportunity! 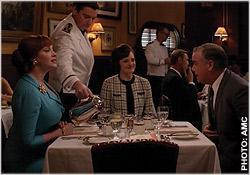 When Joan realizes that the Avon guy is not interested in romance,  (and that he can’t even remember that he’s divorced!) and that she doesn’t have to worry about her goods being on display, she reinvents an identity for herself on the spot: “I’m in charge of thinking of things before people know they need them,” she says. That beige leather shoulder bag/lady attaché case that “change agent” Joan totes to lunch was one of the most poignant things I’ve ever seen, representing Joan's desire to seem professional and beyond-purse serious. (Wasn’t it a bit ‘70s, though?)

I loved Peggy’s story about her mother vacuuming the drapes in preparation for the Avon Lady, and was distressed at Joan’s bad timing in cutting her off. It was a beautiful metaphor for the awkwardness with which Joan is operating. At the same time, Peggy’s reaction to Joan’s disinviting Pete was a bit over the top. Peggy’s turning into  a shockingly inflexible Margaret Thatcheresque stickler-for-the-rules.

Later, the two women air out their resentments, and Peggy indeed comes through, saving Joan’s skin for now. (“Possession is 9/10 of the law” Ted tells a scowling Pete.) This act was repeated all over the episode: Peggy saved Joan, Roger saved Don, and Bob Benson saved Cutler.

The episode ends with a disappointed, grumpy Pete  going over to the other side,  toking on Stan's joint on the creatives’  couch.  A young woman in a tiny, bright yellow miniskirt walks by, and Pete is drawn to her like a bee to honey.  Hope springs eternal.

Damn, I forgot the Manischewitz.

mad men, tv
22 comments about "'Mad Men' Episode 610: A Tale Of Two Cities, Or 'You're The Guy Who Came In A Taxi?'".
Check to receive email when comments are posted.
Read more comments >
Next story loading