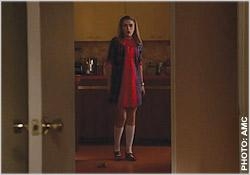 Titled “Favors,” this was one of the season’s most surprising, brilliant, but difficult-to-watch episodes, featuring extraordinary performances from the entire cast -- but actors Jon Hamm and Kiernan Shipka deserve extra kudos. How many times can poor Sally lose her innocence?  And how many times can Don survive all hell (or his inner Dick) breaking loose?

While we’re counting, the fact that Don would get caught like a rat in a trap was foreshadowed early in the show with the actual rat, trapped and bleeding, in Peggy’s dump of an Upper West Side apartment.   Sex, rats, and favors don’t mix much. The episode was also a lot about keys and doors, and places that shouldn’t be entered.

But mostly, it was about conflicts (Sunkist vs. Ocean Spray) and massive role confusion: within families, between parents and children, (Pete and his mother and Don and Sally), in romantic relationships (Manolo and Mrs. Campbell, Pete and Ben), and friendships (Sally and the evil, Eddie Haskell-like Julie.) 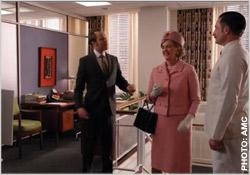 Peggy mistakes Stan for a boyfriend, calling him in the middle of the night, asking for a killing favor, just as in Annie Hall, Diane Keaton called Woody Allen to take care of a “bug the size of a Buick” in her bathroom. Peggy even offers to trade sexual favors in return for Stan doing the rodent deed. And he responds that the problem mammal would be “dead by the morning.” (And we learn that Stan sleeps not with the fishes, but under an oversized poster of Moshe Dayan.)

Confusion reigns, like some darker midsummer night’s dream: Pete’s mother mistakes Peggy for his ex-wife, Trudy; she also goes all cougar on her nurse, Senor Wences (I mean Manolo),  and Bob Benson makes some sweet kneecap love to Pete, who has openly stated that “homosexuals are degenerate.”

“When it’s pure love, why does it matter who it is?” the service-oriented Bob tells him, getting weirdly other-worldly and sappy, like someone whose takeout coffee was just laced with pixie dust. 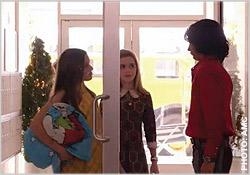 As sons and daughters, it’s odd that Pete and Sally would find themselves in the same boat, both grossed out by the thought of their hypersexualized parents “doing it” with strange partners.

Obviously, Pete’s been plenty damaged by his cold and cruel mother already.  But Sally’s situation is worse, made more troubling by her father’s selfish attempts to  cover up, telling her, as he stands outside her door, that he knows what she “thinks" she saw. He uses the “I was comforting Mrs. Rosen” line like she’s a five year old. Earth to Don: this is not a situation like Peggy’s, when you can sit at her bedside and tell her “you won’t believe how much this never happened.”

It happened. And now the worst of all damage is done: by trying to “save” his mistress’ son, and taking a victory lap to celebrate, Don has managed to inflict his own childhood nightmare (seeing his Uncle Mac attack his stepmother, when Don/Dick was about the same age) on Sally. 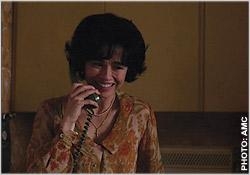 In that maid’s room off the mustard-colored kitchen, the scene was set up to be as squalid as possible: Don standing with his pants around his ankles,  black socks still on, with Sylvia receiving on the bed with her naked legs up in the air.  Meanwhile, Sally is dressed as a conservative schoolgirl, in knee socks and a blouse with a bow

The terrible irony was that Betty somehow thought that by staying with Don, and not in a hotel with boys and a teacher, Sally would be better off.

When they were at Bobby’s camp, Betty told Don that Henry thought Sally was just like Don. And at times in this episode, her cadences sounded exactly like his. And Sally ended up standing at Sylvia’s kitchen door, listening, and wanting to sneak in, just as Don did when he was moping and smoking in the hallway.

Back in their apartment, Sally has to watch Don get honored by the Rosen boys, and hear Megan call him “the sweetest man!”

“You’re disgusting, “ Sally tells him, as she gets up from the table and runs inside. (It’s a parallel to what Pete says about his mother and  her “Manny.”)

Meanwhile, at the office, Don is also often MIA, not reading memos, not going to meetings. I don’t know how he expects to get through this. 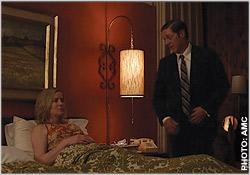 But it seems that every time we get collectively fed up as viewers, and count Weiner and the MM writers down or out, they come springing back, out of the blue, to give us all a flying punch in the face, to paraphrase Ted C’s interesting aerial Fred Astaire reference.

That line was unexpected and fitting: indeed, Ted is sometimes forced to play Ginger to Don’s Fred, doing everything Don does, except while dancing backwards and in high heels. As former enemies and now oddly conjoined co-creative directors, brothers under the skin, Don and Ted sometimes act like masters of the universe, lead dogs peeing on their respective territories. (And don’t forget that cranberry juice is an active diuretic!)  Other times, they’re just mad little babies, peeing in their diapers and crying “I don’t want his juice! I want my juice!”

The scene with Ted’s wife stretched out on her bed in her flaming orange bedroom, complaining that he is never home, paralleled the scenes that Don used to endure with a more-petulant Betty in their suburban bedroom. (Weiner is a bit of a misogynist when it comes to creating nagging wives, although Ted’s wife seems more tuned in to reality.)

Ted’s wife is lonely, and there are also a series of interesting shots showing alienation: Don alone in the elevator, sweating and pacing like an animal; Pete alone, with no cereal to be found in the box; Peggy living alone among rats -- but later, not so triumphantly, with a cat, which is what her mother had meanly predicted for her.

The ending, with Don walking down the hallway a defeated man, was made all the more powerful by the lack of music. His shoes were squeaking, like a hobo’s, and he seemed to be shuffling off this mortal coil.

Only two more episodes left this season. Do you think Don will escape again?