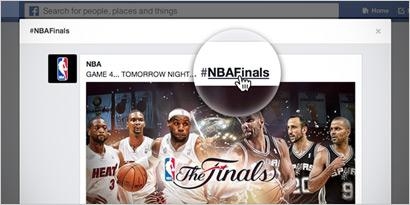 Borrowing Twitter’s signature feature, Facebook on Wednesday announced adding support for hashtags on the social network. The long-rumored move allows Facebook users to add a hashtag to their status updates or comments to connect to conversations around the same topic.

"When you click on a hashtag in Facebook, you'll see a feed of what other people and Pages are saying about that event or topic,” stated Greg Lindley, Facebook's product manager for hashtags, in a blog post today.

To date, Facebook has not offered a simple way for users to see what others are talking about. Making clickable hashtags the hallmark of its service has helped Twitter become the Internet’s unofficial water cooler and breaking news service. Facebook also seems to have taken note of Twitter’s inroads into television, where it has become the go-to social platform for chatter around TV shows and major viewing events like the Super Bowl and Academy Awards.

That activity has helped spawn real-time marketing efforts on Twitter, like the much-publicized Oreo tweet during the Super Bowl blackout this year. Twitter’s TV-related expansion -- which have helped it land ad deals with Publicis Groupe and WPP -- has not been lost on Facebook. In its announcement, the company pointed out that there are between 88 and 100 million Americans on Facebook -- “roughly a Super Bowl-sized audience every single night."

It also noted that the recent “Red Wedding” episode of “Game of Thrones” received over 1.5 million mentions on Facebook, and that this year’s Oscar’s telecast generated 66.5 million Likes, comments, posts and other interactions on the site. With the new capability, Facebook said users can now use Graph Search to find a specific hashtag such as #NBAFinals.

People can also click on hashtags that originate on other services, like Facebook-owned Instagram, and write posts directly from the hashtag feed and search results. When a hashtag is clicked in a comment or post, users can see what is being said around that event or subject in a lightbox window. A status update prompt at the top of the discussion invites users to join in.

For marketers, Facebook also issued a series of tips on using hashtags:

*If you are already using hashtags in an advertising campaign through other channels, you can amplify these campaigns by including your hashtags in Facebook advertising.

*Any hashtags that you use on other platforms that are connected to your Facebook Page will be automatically clickable and searchable on Facebook.

*Like other Facebook marketing tools, hashtags allow you to join and drive the conversations happening about your business. We recommend you search for and view real-time public conversations and test strategies to drive those conversations using hashtags.

*Hashtags do not impact your distribution or engagement in News Feed on either desktop or mobile.