The data is available. Media traded in June via real-time bidding (RTB) both globally and in the United States was...drumroll please...

According to new data from Rubicon Project’s real-time marketplace app, the U.S. had a 1% drop in spend and a 3% drop in impressions last month (compared to May). The global market didn’t fare much better, with a 1% increase in spend but a 1% decrease in impressions.

June marked the third straight month that impressions dipped both globally and in the U.S. This can be partially attributed to the massive 34% increase in impressions (in the U.S.) in March.

If you're wondering how impressions could have dropped in three straight months but somehow still increased by 7% as a whole, remember that January took a major hit across the board because of its post-holiday placement.

When it came to individual categories, spend in the Food & Drink category dropped to 9th after cracking the top 5 in May. The drop can be attributed to the category’s 38% decrease in spend. 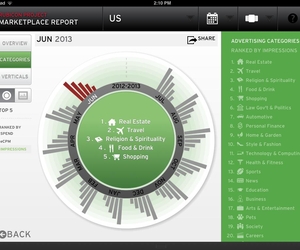 Law, Government, & Politics were big spenders in June, dishing out 123% more than May. Despite the major increase in spend, eCPM for the category only rose 6%.

Real Estate was the big winner in June. It was the leading category in terms of impressions. To put that in perspective, in March it was 18th (out of 21). The category was also tops in terms of eCPM, improving 32% over the month of May. Hobbies & Interests had an 81% drop in eCPM in June - the biggest drop among all categories.