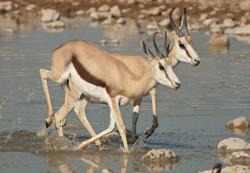 Ya gotta love a good Marlin Perkins reference. At this week's OMMA Display extravaganza in Los Angeles, I made a lot of allusions to this being the Woodstock of display -- sex, drugs, rock and roll and banners and all that. But Sporting News President and Publisher Jeff Price raised my Yasgur’s Farm mentions with a Marlin Perkins reference. He used the longtime host of Mutual of Omaha's "Wild Kingdom" to make a point about how oblivious most publishers had been even a year or two ago of the approaching threat of mobile migration to their business.

Remember when Perkins would show a pride of lions quietly creeping up on a herd of gazelles blithely drinking from the watering hole, and we all knew what was about to happen? The arrival of mobile was just like that, he said. Despite all the clear signs that were obvious to anyone that this was going to be a big deal with big implications for media -- “publishers are still not aware of what is about to eat them,” he quipped.

The panel on mobile at OMMA Display was posed thus: “Will the Device Migration Save Or Scuttle Premium Display?” And the panelists rose to the occasion with some refreshingly frank takes on the hurdles that continue to stand between marketers and serious mobile investment.

“We need success stories,” said Sean Halter, CEO, Connectivity Marketing and Media. Speaking to Jeff standing in for the media side, he advised: "Media needs to show buyers exactly what mobile can do for them." He likened it to the early stages of digital display when fools rushed in but no one was yet building a compelling set of cases for how, why, when and whether all of this stuff really worked in reliable ways. Buyers put certain amounts of money against various buckets in their budgets and generally have a sense of what they will get in return. "We are not anywhere near that in mobile," he said.

Price agreed that as a publisher he is frustrated at the distance between the “reams of analytics for transactions from a desktop,” but he can’t bring the same detail to mobile. “We have conversations with brands, but can’t give the same kind of metrics. The science needs work.”

Until publishers can bring him reliable cases that can show him what his investment in mobile is going to be worth, says Halter, "expect us to beat you down on CPMs."

Scott Holmes, founder and president of United Futures, added that mobile will become important and unique when “we see more of a connection between advertising and the e-wallet, where you look at mobile being a very hyperlocal component. When we can deliver a message to someone we know is standing in front of a make-up counter -- that is what we are excited about.”

But that level of granular targeting and hyper-relevance carries with it a much different metric than display. “That is not CPM anymore, but a CPE or a transaction," he said.

Among the entire group, there was considerable doubt about the role display as we have known it will or should play on the phone. “The little banners on the bottom of your phone don't work for anybody,” said Halter. “So don’t bother selling it to us.”

In fact, there was overall doubt whether interruptive advertising of any kind really could work on a medium that people consulted in a very different mode from other media. Do we even want to try to replicate on mobile the stuff that was only nominally successful on the Web? Holmes wondered whether mobile offers a real opportunity for brands and publishers to reboot things. “The best opportunity to educate is to get in early enough in the process to eliminate the process,” he said. “We are held to banner standards people wanted to get rid of ten years ago. Let’s do a clean slate. Let’s work with the client and publisher to come up with something unique.”

He made the case -- which I think needs to be made more emphatically and regularly -- that mobile may reach its potential when it gets beyond impression, CPM-based models. “Make a relevant and engaging piece of content or experience that your readership actually uses,” he said.

Price concurred that ultimately mobile is not a CPM medium. It forces upon us the one-to-one marketing relationship that digital long promised.

This is the kind of fruitful and thoughtful discussion about mobile limitations and potential that I hope we can have more often.

"Gazelles at a watering hole" photo from Shutterstock.