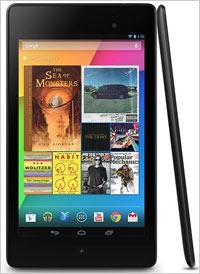 “Oh, this is much easier to hold,” my daughter said when I handed her both the iPad Mini and the new Google Nexus 7 tablet. She immediately fell into the super hi-res screen of the latter and the interactive background screen. “Android is much more customizable,” her nearby friend also observed.

Here are two twenty-somethings for whom the Apple daze is gone. Their relationship to their devices is much more purposeful and personal than it might have been even a couple of years ago when my daughter clamored for her first iPhone and a release from her Android hell. They have a clearer sense of what they want to do with these devices now and that trumps the OS brand.

Which is ultimately good for Google in its long struggle to break through that iPad stardom Apple has accrued. In the few days I have had with the Nexus 7 and the Android 4.3 OS, I can say that it is less irritating than it used to be. The technology is superb. The display is crystal, and this comes through in razor-sharp video playback and a visual density that compensates for the smaller-than-iPad Mini screen. The narrower dimensions of Android, Kindle and Nook 7-inchers have always left me regarding them as e-readers with benefits or oversized phones. Indeed, the Chrome browser on the Nexus still tends to pull down the m-dot versions of many sites, which only exacerbates the smartphone feel.

Still, this is one case where the technology does make the Nexus 7 feel more capable than a phablet. The resolution is absorbing. And the sheer speed of this thing is quite remarkable. App loading and even browser performance are notably superior to my 3rd-gen iPad.

As for the Android OS itself, experience on the tablet is smoother than it has been. Transitions are cooler. Google is striving to emphasize its much-improved Google Play market and the range of media options here. It is feeling more like a media consumption device now. The Nexus even turns off with a TV-like flicker down to a narrow center spot.

But ultimately, Android tablets do not need to be quite as seamless and even app-rich as the iPad to make their mark. As users like my daughter come to know what they want from devices separate from what Apple or Google structured from them in the early stages of the App Era, the OS is less important.