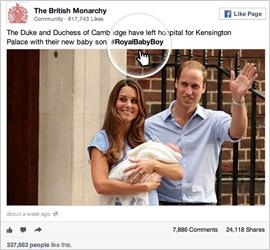 To help brands broaden their exposure beyond its walls, Facebook has begun allowing users to embed public posts from Facebook pages on their own Web sites and blogs.

The rollout of Embedded Posts today starts with a small group of sites -- Bleacher Report, CNN, Huffington Post, Mashable and People -- but will extend to more companies, brands and public figures with Facebook pages soon. The posts will appear the same as on Facebook, displaying attached media like photos, videos and hashtags.

Users embed posts by copying and pasting a single line of code that appears in a dialog box after selecting the “Embed Post” option when they click the icon in the upper right corner of the post. Currently, embedded posts can’t be customized for a particular Web and will have the same dimensions as on Facebook. If a post is made private or deleted, a notice will indicate it’s no longer available for embedding.

Facebook has offered social plugins such as “like” and “comment” buttons to third-party sites for years, making it easier for users to link back to Facebook and help publishers expand their audiences and increase engagement. Embedded posts extend that effort, giving outside sites the ability to integrate the Facebook experience even more directly into their own Web content.

In addition to potentially expanding the audience and interaction for brands on Facebook, it also helps the social network further extend its influence across the Web