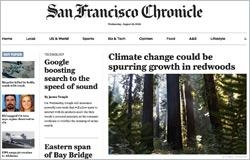 While online paywalls have been widely touted as the wave of the future for newspaper publishers, they’re not universally successful, judging by the example of the San Francisco Chronicle, which is abandoning its paywall after just four months of testing.

According to SFWeekly, Chronicle employees were informed of the decision to demolish the paywall during a meeting on Monday.

In March of this year, the Chronicle established a paid content site, SFChronicle.com (separate from its free SFGate.com site) and began asking online readers to buy a monthly subscription costing $12 per month. With the demise of the paywall, the Chronicle’s content will again be available for free on SFGate.com, although readers who are feeling altruistic can continue paying for access to SFChronicle.com if they choose.

According to a statement from the publishers to the San Francisco Appeal: “The SFChronicle.com site will continue to provide readers with an online version that replicates a newspaper experience and reflects the changes in the news throughout the day. We will continue to increase the unique assets that distinguish SFChronicle.com, including design features, utility and unique offerings to subscribers that differentiates it from our other content platforms.”

Journalism Web site Poynter.org quoted a separate statement from Chronicle owner Hearst: “The only declaration we can make at this point is our newspapers must continue to experiment, measure the results and continuously iterate the experience.”

Despite the setback at the San Francisco Chronicle, the general trend in the newspaper business still seems to be moving in the direction of online paywalls. The New York Times introduced a paywall in March 2011 and was soon followed by Gannett’s community publications, McClatchy Co. and Tribune Co. in 2012.

North of the border, The Toronto Star introduced an online paywall earlier this week