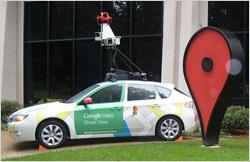 In a defeat for Google, a federal appellate court ruled on Tuesday that the company might have violated the wiretap law by intercepting emails, passwords and other data from open WiFi networks.

The 9th Circuit Court of Appeals rejected Google's argument that the federal wiretap law only prohibits interceptions from WiFi networks that are protected by passwords. Google based its argument on a section of the law that allows the interception of "radio communications” that are “readily accessible to the general public.” The company contended that transmissions sent through open networks are accessible to the public-at-large, and therefore not subject to the prohibition.

But the three judges on the appeals panel disagreed. They said in a 35-page opinion that material sent through WiFi networks doesn't meet the definition of “radio" transmissions and is not accessible to the public. “Wi-Fi transmissions are not 'readily accessible' to the 'general public' because most of the general public lacks the expertise to intercept and decode payload data transmitted over a Wi-Fi network.”

The judges also noted that WiFi transmissions usually are contained in a small geographic area -- often people's homes or offices. “Google was only able to intercept the plaintiffs’ communications because its Street View vehicles passed by the street outside of each plaintiff’s house,” the judges wrote.

A Google spokesperson said the company was disappointed with the decision and is considering its next steps.

Tuesday's ruling, which upholds a 2011 decision by U.S. District Court Judge James Ware, means that consumers who brought a potential class-action against Google for the interceptions can proceed with their case. The litigation stems from Google's admission in 2010 that its Street View cars collected "payload" data -- including URLs, passwords and emails -- from WiFi networks that were not password protected. Google maintains that it didn't violate U.S. law, but also apologized for the interception, and said it intends to destroy the data.

Last year, the Federal Communications Commission fined Google $25,000 for failing to cooperate with an investigation into its collection of the data, but didn't find the company broke any laws.