Subway: Where 'Million Second Quiz' Losers Eat; 'MSQ' Vs. 'Dancing With The Stars' 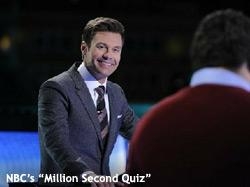 One week ago in this column I wondered if NBC’s “Million Second Quiz” would once again make NBC as proud as a peacock or if it would prove to be a big-budget bust. Given its declining ratings night by night, we now know the answer. The fact that it is likely pulling in more viewers during these two humdrum weeks than NBC would have otherwise attracted might soften the blow, but there is no way to determine its level of relative success without knowing exactly how much money NBC sank into it.

Speaking of money, I noticed something during a commercial break in Saturday’s edition of “MSQ” that was funnier than almost anything I’ve seen in any of the new season’s freshmen comedies. Subway is giving a $5 gift card to every contestant who makes it to the Money Chair, where some players lose tens of thousands of dollars in an instant.

“Nobody leaves the Money Chair empty-handed, or with an empty stomach,” raved Seacrest in voiceover.

“A $5 foot-long gift card for September?” beamed a man on camera, looking like someone who was scared not to smile. “Thanks, Subway!”

Actually, in this case it would be where losers eat, since almost all of the people who leave the Money Chair do so without taking home any money at all –- just that $5 Subway gift card, which apparently expires on October 1.

Can you imagine amassing tens of thousands of dollars, losing it, and then being handed a $5 gift card for a sandwich? Why does that seem so insulting? Couldn't Subway spring for more? Can a person even purchase a complete meal at Subway for $5 when tax is added in?

Jeez -- one lucky member of the studio audience on each telecast of ABC's “Live with Kelly and Michael” wins a $500 gift card (from various companies) just for parking his or her posterior in the right place! They don’t have to endure the rigors of qualifying for the game or the pressure of playing in the Money Chair.

I have already complained here that “MSQ” often feels as if some of the most exciting moments of the game happen between telecasts. Maybe it&'s much more exciting during the other 23 hours that it runs online each day, but I haven't made time for that. What I have done is play the game on the “MSQ” app with many online strangers around the country and found it highly addictive. Even if “MSQ” the television program goes away, never to return, it would be great if the app somehow remained indefinitely active, there to play whenever one's brain needs an hour of exercise.

The ratings issues faced by “MSQ” will only intensify tonight as it goes up against early-season premieres of two popular returning shows on other networks -- ABC’s flashy “Dancing with the Stars” and Fox’s durable “Bones.” “Dancing” has put together one of its most appealing rosters of celebrity dancers in years -- including Valerie Harper, who since earlier this year has been waging a very public struggle with brain cancer, now reportedly near remission. Harper was one of the most beloved and most awarded television performers of the Seventies, so much so that her popularity has never dimmed. Earlier this year, when she made the startling and sobering announcement about her health crisis, it felt as though anyone old enough to have enjoyed “The Mary Tyler Moore Show” and its spinoff, “Rhoda,” was rallying for her. One can’t help but worry how she will hold up amid the physical demands of participating on this show.

Will Harper's legion of fans and the people she has inspired vote her through week after week in a show of support? Certainly, the stakes are higher than usual. I can't recall a situation quite like this one in the recent history of live reality competition programs. In its 17th cycle, “Dancing” could turn out to be one of the new season's most rewarding television experiences.