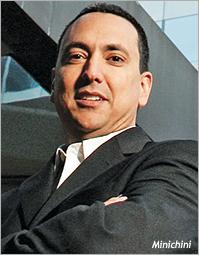 Steve Minichini caught on to the potential of interactive media early on.

“You remember Prodigy and aol?  I was really among the first getting online,” he recalls. He attracted a crowd in his office at Jordan McGrath Case & Partners in the early 1990s when they saw him playing a game of checkers on his computer. His opponent was in Japan.

“I had this whole audience behind me at the office, watching me at this old computer. It sounds silly, but my attitude really takes off from there,” he says.

Today as TargetCast tcm’s president of interactive marketing, Minichini  comes to work with the idea there’s a way to fulfill the needs of just about any advertiser: Technology will provide.

“For every single client, I want to be able to say, yeah, I think we can do that,” he says. It’s a philosophy, not a boast. “I believe that’s what technology attached to the right media and the right marketing can do.”

TargetCast’s integrated marketing plan plays a role in the success of amc’s Walking Dead and other winning campaigns for Procter & Gamble, Hotels.com and a host of BigPharma clients.

TargetCast has developed measurement tools to help it get a piece of the pie at the table once filled with totally traditional media agency outlets.

“What we have done here at the agency is try to train what we call cross-media athletes,” Minichini explains. “Those are individuals who understand media and strategy across any platform because that’s how consumers are using multiple devices. It’s watching tv — on the phone. That’s how we have to look at the market, right?  So we are trying really hard to understand both sides of the equation.

“But tv is still the driver, and bringing all the power tv brings,” he adds. “Costs are going up and ratings are going down. But people still watch a ton of tv! But now they have brought their technology around with them. Now the phone is like glued to their leg. They’re on Facebook. They’re tweeting something.”

And those are all interactive advertising chances TargetCast can get in a digital world much more enmeshed than when Minichini landed one of Jordan McGrath’s first digital campaigns for Nicorette gum.

Minichini has a built-in focus group at home demonstrating how digital has infiltrated daily life.

“I have a son, 9, and a daughter, 6. It blows my mind how they use it [computers]. They just get it,” he says. “That’s what inspires me for what tomorrow will bring. They were raised with this tech. We had to learn it. God only knows what’s coming down the road — in a good way.”

Yet, Minichini can be less certain about some trends. A lot of what’s passing as digital and interactive advertising wisdom, he feels, is anything but smart.

“Social media can foster an unforgiving public if the message isn’t honest,” he says. “You’ve got to put yourself out there for real, because if you try to hide you are going to be exposed more than ever before. You have to take the right approach. You have to talk to consumers about something they want to know about. There are titles out there [at agencies] like ‘chief disrupter’ and I couldn’t disagree more with that. Consumers know what they want. This business shouldn’t be about disrupting your life.”

When he’s not at work, he’s a center for an amateur — but kick-ass — hockey team, the New York Lancers, that won an amateur gold medal last year. He’s endured a couple of concussions and a broken hand, but vows to keep playing “until my legs fall off or my wife won’t let me.” He’s 43, competing against players half his age — and has been getting slammed into the boards for more than 20 seasons.

If this tells you anything about Minichini’s character — he thinks it does — he claims to be “very superstitious.” And so purposely, when he began playing for the team, he claimed jersey number 13.

Minichini credits sports for helping shape the mutual respect and the ability to play “above your game” that he thinks is crucial to business.

His last job as the founder and ceo of Triumph 360 he describes as a major character builder.

“When you’re ‘the man,’ you make or break for your company, especially when it’s a small business. That was so much fun. But the experience, learning about team structure and client dynamics, you can’t learn that by doing anything else, quite frankly.”