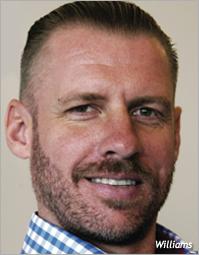 Remember that famous quote about the Battle of Waterloo being won on the playing fields of Eton? It has been said sports build character and can serve as solid preparation for a career as a leader.

Following along, it stands to reason that Donnie Williams’ high school-era football career as quarterback and safety in Connecticut may serve him well in piloting the growing digital practice at Horizon Media. He’s thrown deep with some early investments in fledgling sectors and focused on blocking and tackling in daily client service.

Williams spent his college years at Wisconsin and remains an avid fan of the Badgers. His bio says he signs some 25% of his emails with the school’s rallying cry of “On Wisconsin.”

But now back to Williams’ role as Chief Digital Officer at Horizon, the large independent media shop where he started as a national account director in 2007 and today oversees $400-plus million in investments. The agency’s digital practice has grown in those six years from 10 employees to around 125. Before Horizon, he worked at Carat’s interactive practice as a supervisor, and helped to markedly expand that agency’s Santa Monica footprint.

Okay, that leads to another football link. “I’ve always been associated with teams that have been able to prove out performance and justify the value proposition that we bring to clients and marketers,” the 35-year-old Williams says.

It sure sounds like he’s spent some time thinking about how to identify outstanding talent and foster a culture of inspiration with a results-driven focus. Williams mentions matching employees’ personalities and ambitions with the right clients in order to deliver breakthrough “bottom line” success.

“We thrive off an entrepreneurial spirit,” he says.

To wit is the late-2012 launch of the Treehouse division of Horizon’s digital operations. Under the leadership of Molly Sugarman, the group has brought a creative services offering to the media shop for clients with limited resources. But it also serves as a sort of in-house think tank or futures group, where the aim is to uncover new opportunities for clients or find creative ways to solve specific vexing problems.

“The exciting thing about digital media is there really are very few rules, so if you can think it, you can usually figure out (a media outlet) to work with to pull it off,” Williams says. “We wanted to have a staff on site that could help us … identify the most custom opportunities out there and figure out where brands can connect with consumers in a valuable way.”

Treehouse isn’t the only unit Williams has engineered to propel innovation. Horizon has an insights lab called Distillery and last year made an investment in Blab, a start-up that looks to identify what will be trending in social media before the conversation starts, allowing marketers to be there with relevant messages before the outbreak.

Horizon gets proprietary access to Blab’s intelligence. Under Williams, Horizon has been trying to stay well ahead of the curve in the social space since it launched a dedicated capability about four and a half years ago. Besides traditional digital work, social marketing now accounts for the largest operation at the agency.

The fastest growing group is in the mobile space, which Horizon launched in the middle of last year. Expectations are the staff will double in size over the next six to 12 months.

“We’ve gotten on to some stuff early and we’ve made some strong bets and we’re kind of reaping the benefit of that,” Williams says.

With more functions to pitch, Williams has helped the agency bring in a load of new business to where the digital group services about 100 brands. Capital One was the largest account Williams helped land; Crown Imports is another. Geico has been a long-time Horizon client — one that pre-dates Williams — but planning to keep the Gecko top of mind in the digital sphere is a consistent challenge.

Geico actually offers a sort of jumping-off point for much of Williams’ work. The heavy-spending insurance company has helped Horizon build significant visibility as a tv shop. Williams, in turn, views his role as trying to burnish the agency’s reputation as a full-service operation.

In a sense, Williams is a digital native, having worked uninterruptedly in agency digital operations since graduating college in 2000. He started at Lowe, spending significant time on the Dell account. He then moved to Carat, spent less than a year at Ignited in Southern California. Wanting to head back East — he lives on Long Island with his four children (met his wife at Wisconsin) — he hooked up with Horizon chief Bill Koenigsberg, who was mapping out plans for the agency’s digital expansion.

Williams’ value extends to “thinking five years ahead from a digital strategic standpoint,” he adds.

But what is Williams most proud of? He doesn’t point to specific campaigns that might have won awards or produced breakout roi. It falls under reputation.

He relishes that fledgling companies developing new products come to Horizon looking for its advice and guidance. That goes to being known as an innovator.

That focus on the agency rather than himself wouldn’t surprise Koenigsberg.

“No ego … he breathes collaboration,” the boss says.

That’s teamwork. Maybe there is something to this football connection.