Seniors Are Now The Growth Opp For Mobile 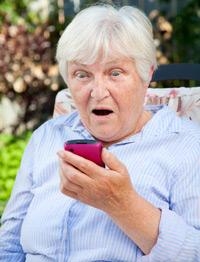 This isn't your grandfather’s flip phone. Or, well, maybe it is. According to the of the smartphone landscape, 50% of the people in the U.S. who own feature phones are age 55 and older.

For the younger sets, we are fast approaching saturation. In its latest roll-up of survey data between June and August, Nielsen found that 81% of the 25- to-34-year-old segment has a smartphone, closely followed by the 12-17 demo at 70%.

All together this means that smartphone penetration in the U.S. stands at 64% -- almost two-thirds of the phone-owning population. And these devices are now the default -- with 80% of people buying phones in the last quarter opting for a smartphone.

When it comes to operating system share, Android showed some acceleration. More than half (53%) of smartphones are running the Google OS, with 40% on iOS. The share of recent buyers going to Android, however, was up to 61% versus 34% to Apple. But it is unclear whether the imminent release of the next generation of iPhones depressed Apple sales in recent months.

It will be interesting to see if marketers start zoning in on the senior segment as an opportunity to secure these late mobile adopters as they board the smartphone express. Actually, I would say marketers and media companies should be looking very carefully at the tablet platform for seniors. According to the latest Pew report on the subject, the share of those 50-64 who owned tablets rose from 14% in April 2012 to 32% in May 2013, the same rate of growth as younger demos. Even the 65+ segment was up to 18% tablet penetration.

This could be an interesting segment for second-screen experiences, for instance, since TV viewing times may escalate among groups over 55. News and information consumption is very high in this demo. And according to Jekyll and Hyde, a Midwest direct marketing agency focused on seniors, this group is usually most responsive to TV ads during daytime hours but less responsive in prime-time and late night. One of the intriguing aspects of senior media consumption is that the audience is very engaged -- seeking information, not just passing time, the agency says. As the smartphone ad and marketing industry matures, in a literal sense, it may need to think beyond its early assumptions about reaching consumers that relied on younger segments and their modes of media use.