The people (or has public relations gone programmatic, too?) responsible for creating and placing press hype for companies in the digital ad space are killing it, and killing me.  A couple of recent headlines caught my eyes and made them roll.\

“Can Native Scale? These Networks Say They Can.”

It’s “native advertising,” as in native to the very content site that created it.  Scaling beyond that site’s wall is surely doable, but, by default, waters down the value for those meant to read it. But, hey, don’t let common sense get in the way of some self-serving news.  So sure, let’s run that fake business article about cats in cubicles “powered by Iams” on all sites that reach pet-owning C-suite executives.  It will look great on Barrons.com.

While on this topic that requires quotes (“native”) let’s pick on BuzzFeed for a minute, as its strategists seem to be unscathed by common sense. Its head of PR deserves a raise because it seems like you can’t read anything without hearing from the company’s founder.  BuzzFeed’s claim to fame is selling “native advertising”: it doesn’t sell the ad banners other silly publishers still sell.

You sell ads like everyone else; you just don’t put boxes around them to identify their existence (so I did that for you -- see directly below). 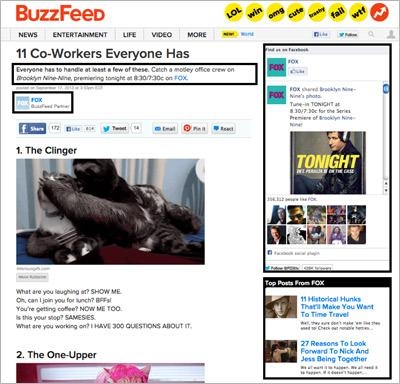 I got ya down for four “non-ad” ad impressions on this page view. I would bet you overpromise the total impressions these “non ads” generate, and then go out and buy ad inventory on the exchanges to promote these “stories” to make up for your shortfall on the ad impressions you don’t sell.  Sounds about right, huh?  C’mon, guys, you are shucking ads like the rest of us -- you just happen to be better at selling yourselves as a company in the media ad sales business that, umm, doesn’t sell ads.

“Is Programmatic Ready for Prime Time?”

This story is as hyped up as a six-year-old on a double mocha latte.  We are talking about less than $4 billion in ad dollars.  The “dying” print industry had over $30 billion in spending last year, but you don’t see magazines hosting gala upfronts.

When you turn down the volume on the programmatic rhetoric, you won’t hear one premium publisher putting their inventory on an exchange and talking about all the money they are making.  That’s because, in simple terms, programmatic buying replaces the negotiation of value between publishers and buyers with price automation determined by value buyers solely define.  So of course buyers are screaming for it, and portals with no brand equity and billions of avails are throwing parties, but how is this a win for premium publishers again?  Oh, right, it’s good for the ecosystem. Get my tech stack on the phone, pronto.

I have said it before, but it bears repeating: Clients are people, and they like to see their own ads.  When they see them on mobile devices, they squint and then wonder if they should be spending more money on “in theater” advertising.  So yes, this is the year of mobile.  You nailed it.

Hey folks, just having some fun making fun of advertising hype week here in New York City. The bottom line: Anything and everything in our business of selling ads is not the be-all, end-all, it’s just a unique complement to the overall marketing mix clients determines as the best plan to tap consumers on the shoulder and let them know their brand exists.  But that’s not gonna grab any headlines.

This column is dedicated to the memory of Jennifer Rosoff, who died much too young. She worked for Hearst and Condé Nast before joining TripleLift.  She sold ads and she was a real pro.  She was one of us.

online publishing
1 comment about "Welcome To Hypeweek".
Check to receive email when comments are posted.
Next story loading