Early on Monday morning, at the start of Advertising Week, I came up from the Times Square subway station and walked straight into the parade of brand characters coming down the street. There, in a fleet of convertible Mini-Coopers, rode the Kool-Aid pitcher, the Keebler Elf, and other spokes-symbols, tailed by an open-air double-decker bus containing even more of them.

Some people in Times Square took pictures, while many of them scratched their heads, as if to say, “What, exactly, are they all doing here?”

It’s a question I’ve asked myself a lot lately, since the quest for relevance has led many marketers down the garden path to real-time marketing that uses social media to insert brands into conversations where they might not be wanted. In the rush to get in on the game of creating 140-character alleged witticisms, most of it misses the mark. Real-time marketing, by itself, doesn’t equal relevance.

Several hours after watching the parade, as I emceed MediaPost’s OMMA Social @OMMA Global, I witnessed that point illustrated beautifully.  This moment of clarity came courtesy of Mike Proulx, senior vp/director of social media at Hill Holliday. In the middle of his presentation about the agency’s #DunkinReplay campaign, he showed just one slide: 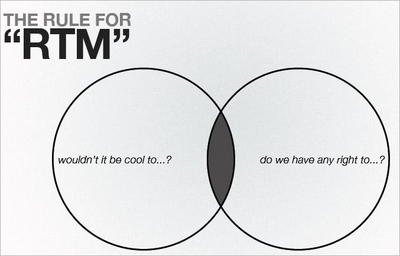 The agency asks its clients the two questions shown above: “wouldn’t it be cool to…?” and “ do we have any right to…?” any time a real-time marketing opportunity comes up, said Proulx. The minimal overlap between the two circles illustrates how little the answer to both questions is “Yes.”

While seemingly obvious, the rush to real-time indicates these questions are seldom asked -- or, if they are, the answers are ignored in an all-out rush to the keyboard. After all, any unpaid intern can create a tweet to honor National Chocolate Milk Day or wish Google a happy 15th birthday -- but should they?

Fortunately Proulx isn’t alone in hammering home the point that real-time marketing needs to be, well, real. Later on Monday, during a panel discussion, MasterCard’s Gregg Weiss brought up the theme. Before the company posts something, the social media team simply asks: “Would someone want to talk about this?” While a slightly difference question than Proulx’s, it gets at the same ideas: Will what I’m doing be in tune with my audience? Is this the right time and place to be?

Yes, this stuff is brain-dead simple, but somehow it gets lost in the shuffle. As marketers have defaulted to being intrusive for decades, it seems all too easy for them to continue to do so in social media.

As for those spokes-characters in Times Square earlier this week, I know it was Advertising Week and all, but what were they doing there, anyway?

social media
1 comment about "Parade To Nowhere: When Real-Time Marketing Isn't Relevant".
Check to receive email when comments are posted.
Next story loading