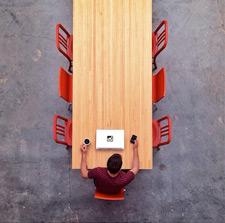 Instagram on Thursday provided more information about the advertising it recently announced for the photo-sharing app -- along with a preview of what ads will look like.

The Facebook unit said earlier this month that users would begin to see Sponsored Photos and Sponsored Videos in their feeds from brands they don’t necessarily follow. The sample ad posted on the Instagram blog today indeed features a “Sponsored” label in the upper right corner. Tapping an icon in the bottom right corner showing an elipses (…) allows people to hide an ad they are not interested in.

Conversely, users can also choose to Like or comment on an ad through buttons at the bottom left. The sample ad image, and others, indicate that Instagram is aiming for high-quality -- even arty -- images and videos. The ad shows an overhead photo of a man seated at the head of a wooden conference tablet with bright red chairs on a slate gray floor.

U.S. Instagram users will begin to see that generic ad in the next week to give them a better idea of the look and feel of an ad before actual branded ads launch.

Sample ads from some of these companies can be found here under “Brand Assets.”

On its "About Ads” page, Instagram said ads will be targeted based on people that users follow or photos and videos they have “Liked” on the service, as well as their interests and basic profile information on Facebook. User feedback -- whether closing ads or posting comments about them -- will also figure into what ads a user is shown.

Writing on its own blog Thursday, digital agency 360i called Instagram ads “a new kind of brand advertising opportunity on mobile, with a focus on highly creative, premium content.” It also suggested the company is wise to move carefully in rolling out advertising, since users have grown accustomed to “an uninterrupted experience” to date.

Instagram also reiterated that users own their own photos and videos posted to its app or Web site, and that advertising won’t change that policy. The company faced a fierce backlash last year after changing language in its terms of service that appeared to give it the right to license users’ photos to advertisers.