The burgeoning audience-based TV/video ad marketplace has a name and some scope now thanks to a marketplace analysis conducted by long-time media industry economist,  researcher, consultant and publisher Jack Myers. The analysis, which was passed on to me by Simulmedia Founder Dave Morgan uses a simple name to describe the marketplace, “convergence,” and Myers predicts while audience-buying is a relatively tiny sliver of the $75 billion spent on TV and digital video advertising, it will grow rapidly, especially the programmatic elements of it.

Within three years, Myers predicts audience-based convergence buys will be growth to more than $30 billion, and by the end of the decade will be the vast majority of all buys made in what will then be a $116 billion convergence marketplace.

Not surprisingly, Myers believes programmatic’s share of the convergence market will also begin to scale rapidly, growing from almost nothing today to billions of dollars by 2016, to the majority of all buys made by 2020.

This is where Morgan’s Simulmedia becomes an interesting part of the story. During the meeting, he showed me some new methods Simulmedia is developing for targeting and buying TV, and ultimately video, audiences by leveraging the power of both first- and third-party data, including the data linking actual product sales from a single-source TV audience database (TiVo’s TRA) to new audience segmentation clusters in Simulmedia’s audience-targeting system. In other words, you’ll be able to use it to target and buy TV advertising to reach consumers of a product, or even a competitor’s brand.

Simulmedia isn’t the only company using smart data to redefine TV audience-buying. Jon Mandel’s PrecisionMedia  and VisibleWorld’s AudienceXpress are developing similar segmentations. By unlocking the value of previously opaque audience segments, all of these efforts should contribute to the kind of growth Myers is projecting for the marketplace. 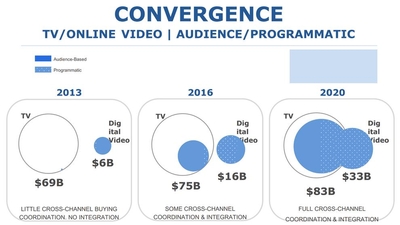