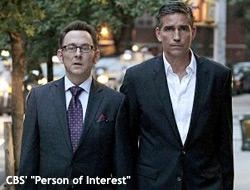 In a strange turn of events that might be described as unfortunate, two of CBS’ finest procedural crime dramas -- “Person of Interest” and “The Mentalist” -- are currently telling very similar stories in ramped up multi-part episodes strategically scheduled to maximize the November sweeps performance potential of each series.

Most of the time these two shows are nothing alike, although they both center on the solving or prevention of criminal activity. But at the moment they could support the ongoing assertion that the television writing community is running out of original ideas. That’s a shame, given how distinctive each of them is -- especially “Person of Interest,” currently the most entertaining procedural crime drama on television (especially since Sarah Shahi and Amy Acker came on board).

Now in its third season, “Person of Interest” is a detective show/science-fiction hybrid about a reclusive and very wealthy software genius and a former Green Beret who work in tandem with the New York City Police Department to fight crime. They utilize a mass surveillance camera system initially constructed by the software genius and his former business partner known as The Machine that basically sees and hears almost everything everywhere. (The complex history of The Machine would fill a column in itself.) It’s a dark and often very violent show, but its action is intoxicating and the aplomb with which John Reese (the former Green Beret) dispatches the bad guys is always satisfying. He shoots, he scores, bad guys are eliminated and innocent people are saved or spared future assaults.

“The Mentalist,” on the other hand, is set in Sacramento, California -- a locale that makes the series somewhat sunny and bright even when its story lines are grim, which has been much of the time over its six seasons. It centers on Patrick Jane, a former (and fraudulent) psychic medium who partnered up with the California Bureau of Investigation to help solve crimes after the murder of his wife and daughter by a maddeningly elusive serial killer known as Red John. On last night’s episode, Jane finally cornered the real Red John (after confronting a number of imposters over the years) and did away with him. No need for a spoiler alert there: One would have to be living under a rock not to know that “The Mentalist” was finally wrapping up this extended story line this month. Also, there isn’t exactly a tsunami of audience interest these days in the fate of Red John. That interest peaked at least two years ago, which makes for a teachable moment for the Hollywood television writing pool: Don’t drag stories out so long that people stop caring.

Anyway, in both shows the heroes at the center of the stories have for several years become involved not simply with violent and murderous individuals but with ever-expanding criminal organizations and underworld conspiracies that have engulfed virtually every major character. Here’s where the unfortunate duplication mentioned above comes in: The “bad guys” who have been consistently committing heinous acts in both shows have turned out to be covert groups of dirty cops, judges and other public defenders who have apparently infested the cities in which the shows are set.

In the November sweeps “arcs” for both shows, the gigantic criminal organizations have finally been grievously compromised by the “good guys” -- but only after the losses of countless lives, most recently (and most shockingly) heroic Officer Joss Carter (played by the very popular Taraji P. Henson) on “Person of Interest.” The repetitive message between the few trustworthy characters on each show has been: “Don’t trust anyone in law enforcement!”

I suppose if a person only watches one of these two show, then the feeling of sameness that has permeated them isn’t much of an issue. For those of us who watch both, however, we can only wonder at the “us versus them” repetition of it all -- something that could have been avoided with careful planning and scheduling (and, perhaps, more inspired writing).

These are hardly the only covert-organization/conspiracy story lines recently seen in prime time. There was one running through ABC’s “Castle” for several years, USA Network’s “Burn Notice” literally revolved around one (or more) and an enormously cumbersome one literally squashed ABC’s briefly sensational serial drama “Revenge” during its sophomore season.

And then there’s Fox’s “The Following,” a handsomely crafted but wildly uneven thriller in which a cult of serial killers improbably infiltrated numerous local, state and federal law enforcement agencies as it carried out its fiendish plans.

Perhaps some shows need to build up to such narrative extremes to keep viewers interested. But “Person of Interest,” with its dark canvas full of endlessly fascinating individuals, and “The Mentalist,” with its quirky and sympathetic lead character are strong enough in every other way not to go down this same road. It’s a little late to complain, since these stories have already played out. But I hope “Person of Interest” returns its focus to the self-contained, dark and twisty stories it tells so well. And I’m interested to see how “The Mentalist” continues now that its story is going to jump two years into the future, after the Red John drama has settled.

tv
2 comments about "Bad Cops Are Everywhere On CBS' 'Person of Interest' And 'The Mentalist'".
Check to receive email when comments are posted.
Read more comments >
Next story loading