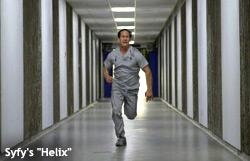 Critics and journalists who cover television are already buzzing: January is the new September. The amount of new and returning programs on broadcast and cable schedules next month is impressive, to say the least. Some will insist it’s overwhelming, and they won’t necessarily be wrong.

Dozens of shows will be competing for attention during that brief post-holiday pre-Olympics window, but one is already looking like a standout: Syfy’s sleek new thriller “Helix” (set to premiere January 10 at 10 p.m.). The pilot is terrific, filled with unexpected jumps and jolts and an ever-increasing sense of dread and claustrophobia that at different times call to mind elements of “Alien,” “The Thing,” “The Andromeda Strain” and even “The Walking Dead.” It looks to be the best scripted series Syfy has produced since “Battlestar Galactica.” (That must be due, at least in part, to the fact that “BG” executive producer Ronald Moore is an EP on this show, too.)

It’s all too easy to declare a show a likely success simply because its pilot kicks butt. Network schedules past and present are littered with strong starters that fizzled out after their second or third episodes. So there is always the chance that “Helix” will turn out to be as stiff as the frozen creatures one scientist alarmingly discovers at a pivotal moment in the opening hour. (Don’t worry, that isn’t really a spoiler. It might seem like one after you see it, but by then nothing about your viewing experience will have been spoiled, right?)

I really don’t think “Helix” is headed that way. The structure of this series -- of the story itself -- suggests that this franchise will keep itself fresh and fascinating not just through its first season but for many thereafter. This is certainly a concern for producers of stories of this kind: Just consider the unrest that set in among fans of “The Walking Dead” after the characters were forced to spend a season and a half in a filthy old prison. There’s a big world out there, even after a zombie apocalypse. (To go into further details about how “Helix” is going to avoid this problem might indeed spoil the fun, so that’s all I’m going to say about that, at least for now.)

“Helix” is all about the increasingly desperate efforts by a team of scientists to stop an outbreak of an especially lethal pathogen that is killing researchers at a remote Arctic laboratory. (Lethal may be an understatement. As one scientist says after seeing what the pathogen does to its victims: “This thing doesn’t kill, it annihilates.”) The location immediately sets “Helix” apart from just about everything else on television. It’s all sleek and high-tech and somewhat claustrophobic on the inside and bright and white and endless on the outside. (It’s all the more impressive when you realize that Syfy is shooting this show on a soundstage in Montreal, and that the primary sets are located underground.)

The first episode of “Helix” swiftly sets the overall story in motion while creating as many little mysteries as it answers. That should tantalize the hundreds of thousands of science-fiction fans who spend more time online talking about shows than they do actually watching them. What is the pathogen? What were the researchers actually working on? How did this disaster in the making come about? Why does one character not die as swiftly as others did when exposed? What’s in the air ducts? I can already hear the roar on social media.

Meanwhile, there are buckets of blood (or, more correctly, black goo) that should keep the horror crowd coming back for more. As I’ve noted in many recent columns, when it comes to certain kinds of television drama, including the horror genre, the bigger and bloodier the action the happier the viewer. In the age of “The Walking Dead” and “American Horror Story,” series of this kind, especially those on cable, have to push the envelope in every way and strive to be ever more explicit if they are going to survive. “Helix” is off to a promising start in that regard.