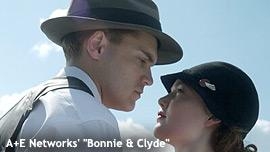 One of the many delights to be had watching NBC’s telecast of “The Sound of Music Live!” was the absence of annoying on-screen graphics throughout. Except for the rating box with those letters largely unseen in prime-time broadcast television (TV and G) that were visible when the show resumed after commercial breaks and the obligatory post-commercial hashtag #soundofmusic -- both of which faded from view seconds after they appeared -- the screen was largely clean throughout.

What an impressive show of restraint on the part of NBC on a night that was one of the network’s highest-rated in years for entertainment programming. The pristine image -- marred only by the network’s logo in the lower left corner, an unavoidable graphic these days under any circumstances -- did as much to recall an earlier era of television viewing as the fact that we were watching a live musical on a broadcast network for the first time in 50 years. In the hands of less caring and more egregiously profit-driven executives, “The Sound of Music Live!” would have been crapped up with ever-changing graphics promoting a number of shows on the network’s schedule.

Compliments should also be directed to A&E, History and Lifetime for the collective restraint they exercised during their triple-cast Sunday and Monday of the mini-series “Bonnie & Clyde.” The final product may have been somewhat problematic – at no time was it anywhere near as gripping as the 1967 feature film with Warren Beatty and Faye Dunaway -- but it had a fine cinematic style, and the atmosphere it managed to create would have been grievously compromised by perpetual animated graphics and promotional messages dancing along the bottom of the screen.

As it was, the overstuffed commercial breaks throughout “B&C” -- especially during sequences that were meant to build dramatic tension -- proved just as damaging as on-screen graphics would have had they been utilized. I couldn’t believe the placement and the length of the last pod, about five minutes before the mini-series’ conclusion, which utterly destroyed the impact of the story’s violent and blood-soaked climax. There were a total of ten commercials (a combo of local, national and promo spots) in between the scene in which the authorities realize they can finally stop the title killers and the actual sequence in which they ambush Bonnie and Clyde and leave them full of more holes than James Caan in “The Godfather.” Thanks to that very poorly placed commercial break, there was no real momentum leading up to the climactic bloodbath and no emotional impact during it.

I realize that there is great value to that final commercial space in programming of all kinds -- especially telecasts that one might categorize as “events.” But the historic triple-cast presentation of “Bonnie & Clyde” was supposed to be something special, and it seems unfortunate that better care was not taken to maximize the viewing experience. Simply placing that pod a few minutes earlier would have made a big difference.

Complaints about commercials and the problems they can cause with television viewing are almost as old as the medium itself. Gripes about graphics are comparatively new, but no less valid. There has been even more talk in 2013 than usual about bothersome and distracting on-screen graphics -- especially now that networks are hellbent on generating as many tweets as possible for every one of their programs throughout their telecasts. As recently noted in this column, the young audience that the networks are trying to attract via such graphics is largely put off and unmotivated by them, while older viewers who remember a time when all of broadcast television looked as good as it did on NBC last Thursday night are simply annoyed.

Like avoiding commercials, experiencing television without intrusive clutter and other elements that often make the initial viewing experience unpleasant is yet another reason why so many people prefer to watch via streaming platforms -- or best of all, DVD and Blu-Ray. The increasing heavy-handedness of onscreen promotion isn’t doing television, or any other media, any good at all.