NBC's 'SNL': Yet Another Reason Why The Prime-time Variety Show Should Be Revived 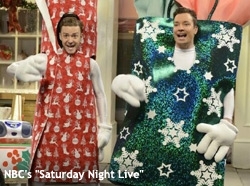 Other critics have carped a bit, but from where I sit, NBC's late-night institution “Saturday Night Live” is having a pretty decent season. While not one of its best, it is far from the many one might point to as representing its worst -- and that’s good enough for any show nearing its 40th anniversary.

I realized how much I still enjoy “SNL” and how much I would miss it if it went away as I was watching its last telecast of 2013 on Saturday night, with indefatigable guest host Jimmy Fallon and equally tireless musical guest Justin Timberlake (who seemed to be more of a co-host) -- both of whom somehow always supercharge “SNL” whenever they are on. They’re always great and everyone they work with always becomes just a little bit better working with them.

This was the annual “SNL” Christmas show, as exciting and entertaining a holiday tradition as any on television. New York City itself is never more alive than in December, in the run-up to Christmas and New Year’s Eve, and I always feel as if that energy (much of its focused directly outside the “SNL” studio around the skating rink and the magnificent tree at Rockefeller Plaza) somehow permeates the telecast. The show certainly does its part, filling certain of its sets with lavish holiday decorations and occasionally cutting to shots of the bustling activity outside.

But this year’s “SNL” Christmas show took the happy holiday spirit to an entirely new level. (Not surprisingly, it was according to NBC the highest-rated “SNL” Christmas show in nine years.) After an opening sketch with Fallon and Timberlake, and toward the end of Fallon's amusing opening monologue/performance, in which he impersonated David Bowie, Bob Dylan and Sir Paul McCartney,  out came McCartney himself to joke around and sing with Fallon (a duet of “Have Yourself a Merry Little Christmas”), which whipped the studio audience into a near-frenzy. If that didn’t put the average viewer in a holiday mood, nothing will. (It’s hard to believe that even as the approaching 40th anniversary of “SNL” becomes a ping on the radar of popular culture, the 50th anniversary of McCartney’s first-ever performance in this country on a live, New York City-based entertainment program is less than two months away. I'm referring, of course, to the legendary performance by The Beatles on CBS’ “The Ed Sullivan Show” in February 1964.)

The McCartney appearance alone would have been enough of a holiday treat but suddenly there was Madonna as a supporting player in one of Fallon's long-running sketches, “The Barry Gibb Talk Show.” She seemed strangely subdued and flubbed a line or two -- but still, what a thrill it was to unexpectedly see one of the most famous women in the world casually pop in (as do so many other celebrities, especially when Timberlake is around).

Then came arguably the most unexpected surprise of the night, and in many ways the most delightful: Barry Gibb, sadly the only surviving member of the ‘70s phenomenon The Bee Gees, popped up at the end of the sketch, and he sang with Fallon (as Barry) and Timberlake (as Robin)!

Overall, the night’s comedy sketches were pretty great, too, especially the spoof of “Family Feud” featuring four actors from NBC series versus four from CBS shows, including Fallon as Jim Parsons (in character as Sheldon from “The Big Bang Theory”) and the invaluable Taran Killam (as Ashton Kutcher from “Two and a Half Men”) and, on the NBC team, Timberlake as Fallon. Timberlake’s impression at one point gave Fallon an uncontrollable case of the giggles, which is a somewhat endearing Fallon tradition dating back to his years in the “SNL” cast.

I think it was the moment when Fallon lost it that I began once again wondering why there isn’t a show like “SNL” in prime time. In the early decades of television there were dozens of comedy-variety shows on broadcast schedules. Often, the hosts and supporting players on these shows would crack up during comedy sketches, or try their darnedest not to. Watching Harvey Korman and Tim Conway struggle not to lose their composure during many of their peerless bits on “The Carol Burnett Show” was as funny as the actual comedy they were performing. Fallon gets this. So does Timberlake, who briefly cracked when Fallon buckled across the “Family Feud” stage.

Certainly, some comedy-variety shows were truly terrible, but others were so good they are still enjoyed today on DVD. In other words, as a genre they were no better or worse than any other.

Isn’t it possible to put together one live (or even taped) hour of quality talk, comedy and music once a week during the television season? Wouldn’t it be a huge draw to giant stars, especially those with albums or movies to promote? Wouldn’t advertisers be interested in supporting such a show? Wouldn’t it be available each week in its debut telecast to an audience much larger than the potential audience for “SNL,” given the late hour at which the latter plays?

This is supposed to be a second golden age of television -- or perhaps the most golden of golden ages, at least where drama series are concerned. Comedies are improving after a prolonged slump, “The Sound of Music” has reignited interest in live television musicals, and the mini-series is poised to make a major comeback. There must be a way for prime-time comedy-variety series to get in on the action. For now, we shouldn’t have to content ourselves with NBC’s randomly scheduled reruns of “Saturday Night Live.” I’d rather have “Thursday Night Prime.”

tv
3 comments about "NBC's 'SNL': Yet Another Reason Why The Prime-time Variety Show Should Be Revived".
Check to receive email when comments are posted.
Read more comments >
Next story loading