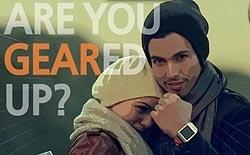 I almost feel bad about foisting this one on our loyal daily readers-- and on Christmas Eve, too. But with 1.1 million YouTube views in about a day, it is likely you will see it somewhere somehow. It might as well be here.

How fitting that one of the biggest misfires of the gadget year, the Samsung Galaxy Gear smart watch, also gives us one of the most cringe-worthy promotional videos in recent memory. This video is not just off-target bad. It is painfully bad on multiple levels, in almost every moment, for over two and a half minutes.

The silly premise has our gadget geek Gear wearer impressing a blonde ski-boarder with the gadget’s calling, picture-taking, data and remote control prowess. Set on a ski outing, the scenario moves from ski lift to slopes to lodge bar, with our hero showing mastery of his smart watch. Meanwhile, another suitor, our geek hero's nemesis, fumbles haplessly with his old-fashioned and-so-un-cool smart phone. Gear-boy makes his mark on the lift, but then meets her again on the slopes, where he snaps action photos of her, and then in the bar, where the sizzling display of his tech mastery goes on.

It almost goes without saying this ad does a disservice to the Samsung brand and to the product. One of the first concepts rhetoricians learn about analyzing language and argument is to understand how the speaker is shaping his ideal audience. It seems Samsung thinks we're gullible and dim-witted enough to believe any aspect of this ad for even a second. Maybe this is laser targeting of a particularly arch kind. The online criticism of the ad is almost unanimous. On YouTube, the thumbs downs are outnumbering the thumbs ups by 5 to 1. But there are still those who like the ad. So apparently there is some sliver of a market for the ad -- probably the same one that bought the product.

Worse, it is a terrible show piece for the product. Every time this nerd-hero holds up his wrist to show off the Gear, my stomach knots up over just how insanely gaudy and ugly the device itself is. Who could possibly want to wear this now?

And it goes on for two and a half minutes. Four episodes, each worse than the other. You have to admire the consistency at least.

OK. enough. Watch for yourself. But I recommend just stopping as soon as you wince a few times. It is only going to get worse.