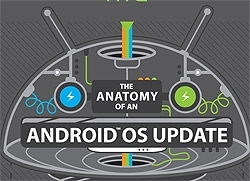 The usual run of holiday mobile metrics showed yet again, not surprisingly, the frustrating reality of Android’s massive market share advantage. Despite its dominance in the smartphone market, Google’s mobile OS was responsible for only 5% of holiday online sales compared to 23% for iOS. Part of this imbalance comes from Android’s continued failure to make the tablet experience as compelling as iPad’s, which is driving a considerable amount of post-desktop commerce.

Android’s infamous lag in mobile ad penetration, m-commerce, mobile traffic and even app revenue generation (although it is catching up there) is in some measure a function of the operating system’s market share success. The range of device prices help Android penetrate areas of the market that iOS does not touch, and these zones of lower-end smartphone buyers often do not embrace data and app use as aggressively as those who tend to buy iPhones.

Also fueling the problem is Android fragmentation. It is a harder target to hit. For instance, Google rolled out its well-hyped KitKat Android 4.4 version a couple of months ago as one attempt to better unify diverse hardware under one OS. Previously, the latest iterations of Android were unevenly compatible with legacy hardware. The problem is that after whetting everyone’s appetite for the upgrades in KitKat, Android owners have had to suffer the same halting, poorly communicated rollout of the new OS across devices. I waited weeks to see 4.4 arrive on Google’s own Nexus 7 tablet. Even high-end handset owners have had to check and recheck their OS update status as KitKat works its way through the multiple tiers required to launch an OS update. As of early December Google’s own dashboard for developers showed that KitKat was reaching only 1.1% of Android devices a month after initial release. Apple’s OD updates routinely surpass 50% penetration within days and weeks of release. Such is the inherent advantage of a closed, proprietary operating system.

HTC seems to be acknowledging user frustration by illustrating just how complex and lengthy the OS provisioning process can be. Two months after the introduction of KitKat, even the flagship HTCOne models on the major U.S. carriers are using Android 4.1 through 4.3. Its new infographic “The Anatomy of An Android OS Update” shares with customers exactly why it is taking so long for them to enjoy KitKat. The paths it shows -- from receiving the platform development kit from Google through chipset, handset, carrier testing and launch -- are daunting. Up to a dozen processes and handoffs among the software, hardware and network operator players need to be coordinated for all of this to happen. It is a chilling reminder of just how complex the mobile technological landscape remains despite the standardization smartphones introduced.

Despite my own frustrations trying to track and write about the fragmented Android landscape, I think Google and its partners underplay the personalization strengths of Android. On the consumer end, fragmentation and open source do have their advantages.