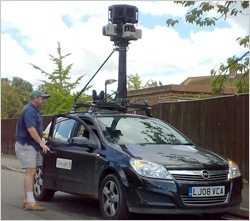 The 9th Circuit Court of Appeals on Friday rejected Google's request for a new hearing in the matter. The decision clears the way for a class-action privacy lawsuit against Google to proceed to trial.

The litigation against Google dates to 2010, when the company admitted that its cars collected a host of data from WiFi networks that weren't password-protected. The company apologized and said that it intended to destroy the data. But the revelations prompted a class-action lawsuit against the company -- as well as investigations by government agencies in the U.S. and abroad.

Google had argued that it didn't violate the wiretap law, due to the wording of the statute. While the law bans the interception of radio and electronic communications, it also has an exception for “radio communications” that are “readily accessible to the general public.

The search company argued that it met the requirements for that exception. The company contended that data sent over WiFi is a “radio communication,” and that the transmissions it captured from unsecured networks were “readily accessible” to the public.

A trial judge ruled against Google, and the 9th Circuit Court of Appeals upheld that decision on appeal last year. Google then sought a rehearing at the appellate court. The 9th Circuit turned down that request on Friday, but revised its written opinion. The new opinion still goes against Google, but for slightly different reasons than the earlier one.

Before, the appellate court said that the WiFi data wasn't publicly accessible because “most” of the public “lacks the expertise to intercept and decode payload data transmitted over a Wi-Fi network.

Now, the appeals court that WiFi transmissions aren't “radio” communications -- and therefore it doesn't matter whether they're publicly accessible.

Google unsuccessfully argued to the contrary, pointing out that WiFi data travels on the radio frequency portion of the spectrum. But the appeals court said that Google's definition of “radio communications” was too broad.

The judges added that for purposes of the wiretap law, the phrase “radio communications” should be given its common meaning -- “a predominantly auditory broadcast.”