I often say the Hispanic market in the U.S. has been changing as quickly as it has been growing the last 15 years. One of the biggest ways it has changed is geographic distribution. One only has to take a quick glimpse at the following heat map to understand how the Hispanic population is spreading to what demographers increasingly refer to as “nontraditional” Hispanic markets (see map below).

However, today’s digital world presents a very different media reality for Hispanics making their way in these nontraditional markets. While markets like Atlanta and Kansas City, Mo., do not have anywhere near the Spanish-language media options that exist in markets like New York or Miami, they have new, low-cost and highly mobile digital media options their Hispanic immigrant predecessors did not have in Dallas or Phoenix in the 1980s. They will be able to listen to whatever music, view whatever programming, and read content from home online, via their mobile devices. They will also be able to stay connected to each other and their home countries via social media options.

1. The end of the 7-Market Hispanic Marketing Model – It’s a common practice among marketers to approach Hispanic marketing programs by focusing on a small number of markets, namely Los Angeles, New York, Miami, Chicago, Dallas, San Francisco, and Phoenix. However, this model will become increasingly flawed, as too much of the Hispanic market will be “left on the table.” 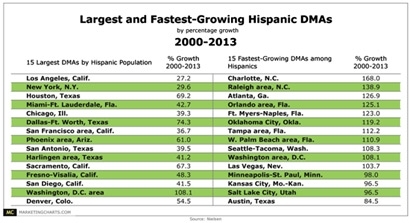