Next Wave Of Telecom Wars To Focus On Switchers 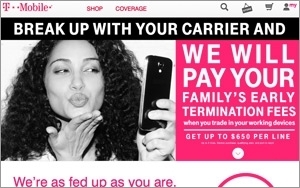 Get ready for another round of the telecom wars.

As more consumers upgrade to smartphone plans (or decide they don’t want them, and remain satisfied with their current phone and texting options), the big telecom providers will be competing for more of each others’ customers, trying to lure them away with deals like T-Mobile’s offer of paying off up to $650 (with eligible trade-ins) in early termination fees for customers who switch over.

“Everyone’s competing for the same subscribers,” Susan Welsh de Grimaldo, director of wireless operator strategies at Strategy Analytics, tells Marketing Daily. “The industry is maturing, and everyone is looking for other plans.”

T-Mobile’s offer applies to customers of any of the three national carriers. AT&T, meanwhile, issued its own pre-emptive offer of  $450 in line and trade-in credits for any T-Mobile switchers. These switching wars are the “next wave” of competition following the maturation of the smartphone era, which began five or six years ago, says independent industry analyst Jeff Kagan.

“[The smartphone introduction] changed the rules of wireless competition,” Kagan tells Marketing Daily. “That was the wave that changed the industry into a data [consumption] industry.”

But now as the smartphone market has matured (nearly everyone who wants a smartphone has a smartphone), the game will be to lure customers away from each other, starting with more competitive pricing, Kagan says. “We’re never going to get to 100% of users owning a smartphone,” he says. “But what is the magic number? The growth rate is slowing, and [the carriers] are winning customers from each other.”

Right now, AT&T and T-Mobile have targeted each other because of the ease of switching devices to each others’ networks. (Verizon Wireless and Sprint use a different technology.) But the trend of carriers separating device costs from their wireless plans is one that will likely grow, Welsh de Grimaldo says. “We’ve seen the operators following T-Mobile’s lead [and] separating out the device costs form the operating costs,” she says. “We’re definitely seeing a switch away from device subsidization.”

“I don’t think T-Mobile is going to change the marketplace because they’re not big enough,” Kagan says. “But I do think the things T-Mobile is talking about is where the industry is going.”

The carriers that could be impacted the most, however, are the smaller, regional companies such as C-Spire, Kagan says. AT&T and Verizon Wireless already command 70% of the market, and will likely retain that healthy advantage based on network capabilities, he says. But customers on the smaller carriers may see a reason to upgrade.

Amidst the hubbub of AT&T and T-Mobile directly targeting each other’s customers, Sprint on Jan. 10 will begin offering a new “Framily” plan that allows customers to build a group of seven friends and family to receive unlimited text, talk and 1 GB of data for $25 per line (and after the first line subscribes at $55 per month). While the plan is a way for Sprint to differentiate itself in the marketplace, the move is likely one that will keep customers from switching rather than attracting new ones, Kagan says. (Indeed, according to Strategy Analytics’ research only 11% of customers on Verizon Wireless or AT&T shared data plans would be likely to switch in the next year).

“It’s going to help them keep customers, but it’s not going to change the industry,” Kagan says.

telecom
1 comment about "Next Wave Of Telecom Wars To Focus On Switchers".
Check to receive email when comments are posted.
Next story loading