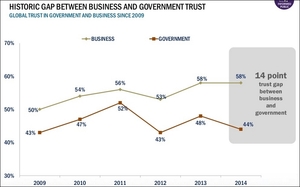 "Trust in government fell globally four points to an historic low (44%), making it the least trusted institution for the third consecutive year," the report reads, noting that the erosion of confidence has been even more pronounced in "informed publics."

“This is a profound evolution in the landscape of trust from 2009, where business had to partner with government to regain trust, to today, where business must lead the debate for change,” Edelman President-CEO Richard Edelman states, noting that businesses are now expected to play a "much bigger role around the debate and design of regulation."

Among the report's key findings is the fact that nearly four out of five (79%) consumers now believe governments should not be working along when setting public policy, and an even higher percentage (84%) believe that businesses can "pursue self interest while doing good work for society."

That last sentiment has become a key element of the strategic positioning of some of the most ascendant global and regional brands, according to research from a variety of sources, especially Havas' ongoing tracking studies on the nature of "Meaningful Brands."

“It has typically fallen to government to create the context for change but it is either incapable or unwilling to do it,” Edelman adds, noting: “People trust business to innovate, unite and deliver across borders in a way that government can’t. That trust comes with the expectation and responsibility to maintain it. Therefore, CEOs must become chief engagement officers in order to educate the public about the economic, societal, political and environmental context in which their business operates.”