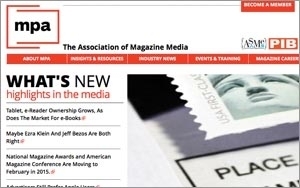 MPA–The Association of Magazine Media and the American Society of Magazine Editors are joining forces to launch a new, coordinated conference and awards junket to be known as “Magazine Media Week,” beginning in February 2015.

To make it happen, the two industry organizations are shuffling their marquee events. In previous years, the MPA’s American Magazine Conference was usually held in October, while ASME’s National Magazine Awards were held in May. In the new, unified program the AMC will take place on Feb. 2-3, 2015, with the National Magazine Awards scheduled for the evening of Feb. 2.

MPA President and CEO Mary Berner stated it was a great way for "these marquee events to have even more impact, while making it possible for even more members ... to attend both.”

ASME chief executive Sid Holt noted: “A lot of ASME members have said to me that handing out awards in May for stories that were published the year before took the shine off the Ellie, so moving the National Magazine Awards Annual Dinner to February makes sense for all of us."

This year’s National Magazine Awards Dinner will be held on May 1, 2014 at the Marriott Marquis in New York City. In order to align dates, there will be no AMC held during the calendar year 2014.

Newsweek is delaying the re-launch of its print edition until March, with the first issue due out on newsstands March 7, 2014, according to Ad Age, which reported the news. Previously, Newsweek, purchased by IBT Media last year, planned to roll out the new print edition in January or February. Editor Jim Impoco told Ad Age: “Editorial is ready, but we're waiting on production.” IBT Media is also in the final stages of its search for a new publisher for Newsweek, although the name of the final candidate is still under wraps.

Bella magazine has relaunched, with a new look, new editorial approach and new sections tailored to the modern urban woman. New regular features include “A Girls Gotta Eat Restaurant Guide,” “A Novel Idea,” and “The Agenda: Top things to see and do in NYC.” The revamped magazine, with the tagline “Beauty is Defined by You,” offers coverage of fashion, beauty, health, philanthropy, arts and culture, cuisine, celebrity and entertainment. The first issue of the relaunched magazine will be on newsstands on March 1, with Sophia Bush gracing the cover. Bella has a rate base of 70,000 copies per issue and distribution is focused on New York City.

Taste of Home challenged readers with a contest to promote Tyson Foods’ new Grilled & Ready Chicken. Playing on the popularity of fashion competitions (think "Project Runway") the “Ready or Not Recipe Challenge” invited readers to “dress up” Tyson Grilled & Ready Chicken with their favorite recipes, demonstrating its utility and “pret-a-porter” ease of use.

Pros at the magazine’s Test Kitchen chose the top four finalists, whose recipes are featured in the February-March issue of Taste of Home, as well as a custom digital advertising campaign hosted at TysonReadyorNot.com. Readers can vote for their favorites through March 15, and the winning recipe will be announced in a gatefold advertisement in the magazine’s June-July issue