Once Again, CBS Gets Its Edge On With The Grammy Awards 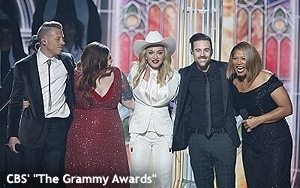 For reasons that continue to escape me, CBS continues to be thought of in certain circles as a network for old people, best enjoyed by seniors and boomers rather than by younger generations. I'm not sure how this applies to the network that first introduced unprecedented levels of violence and other adult content to the broadcast television audience in such ground-breaking and enduringly popular procedural crime dramas as “CSI: Crime Scene Investigation” and “Criminal Minds” and brought “Saturday Night Live”-worthy frat humor to prime time with “Two and a Half Men” and “2 Broke Girls,” among many other hilariously naughty sitcoms.

Rather, there are times when CBS strikes me as the most edgy and contemporary network -- one that isn’t afraid to go there to whatever extent it can.

That was certainly the case last night, when CBS’ presentation of the Grammy Awards kicked off at 8 p.m. with a performance by husband-and-wife superstars Beyonce and Jay Z of “Drunk in Love” -- a song apparently so full of curse words that much of it was dropped out by network censors. It didn’t help that the overall audio quality for this particular performance wasn’t very good, or that the song itself was hardly a rousing show-opener. (One caveat here: The audio quality and the impact of televised musical performances can vary widely among high-tech TVs, not all of which are created equal, and can also be enhanced or compromised by the relative strength or weakness of one’s cable connection. So something that sounds bad in one person’s home may sound much better in another. In this matter, digital communication hasn’t advanced as far as the industry would like to think.)

I could question why the song that the Grammy team chose to open the show with had to be one filled with language that many people find objectionable, but then I would sound like one of those viewers commonly and incorrectly associated with CBS.

It also occurred to me that Beyonce’s presentation of her finely toned and almost fully revealed behind was somewhat distracting. Was such a display necessary? Would the performance have suffered without it? On talk shows this morning I have heard a number of people remark that bad language and bared booty are okay on the Grammys because it isn’t a show that kids should be watching in the first place. To that I say -- find me a kid who isn’t interested in music and find me a broadcaster that wouldn’t appreciate more kids tuning in to what it has to offer. Why can’t the Grammys, at least during their opening hour, be more family-friendly? Where is the harm in that?

For many years now the Grammys have been the most reliably entertaining of the major entertainment industry awards telecasts. That isn’t hard to understand, given their emphasis on inventive performances over actual awards-giving. One might argue that the Tony Awards (also on CBS) are equally exciting and much classier; for anyone who enjoys theater and has easy access to Broadway that may be true. But the many genres of music represented on the Grammys appeal to a much broader audience. There is something for everyone, although I have to wonder if the average viewer appreciates all of the music being performed or just zones in on his or her favorites.

The mass wedding ceremony presided over by Queen Latifah that took place during the fourth hour of the telecast (comfortably located late at night and outside of prime time) and which included same sex couples expressing their love likely wasn’t to everyone’s taste, but there it was, as celebratory and, ultimately, as profoundly moving a moment as we are likely to see on television this year. (There wasn’t a dry eye in the house or, I’m sure, in most homes across America.) If there is any kind of controversy brewing today over this unforgettable sequence I am not yet aware of it. People who would be offended by such an open display of love and acceptance probably weren’t watching the Grammys to begin with.

As much as I appreciated the participation in this segment of Macklemore & Ryan Lewis and Mary Lambert, who performed “Same Love,” and the dazzling Ms. Latifah (whose still young daytime talk show is already one of the day-part’s better efforts), I was thrown by the arrival of Madonna. It was nice to hear her sing “Open Your Heart” at so opportune a moment, but her voice seems to have lost its power and that grill has got to go. I lately feel that Madonna just isn’t trying very hard; that was certainly the takeaway from her recent low-key appearance on “Saturday Night Live.”

Among the other high points of a great Grammy show: LL Cool J once again demonstrating that he is one of the best awards show hosts to come along in years; an awe-inspiring aerial performance by Pink; Paul McCartney singing “Queenie Eye” accompanied by Ringo Starr on the drums; Carole King and Sara Bareilles performing “Beautiful” and “Brave”; Blake Shelton performing with country music veterans Willie Nelson, Kris Kristofferson and Merle Haggard; Miranda Lambert and Billie Joe Armstrong (my favorite pairing of the night) performing “When Will I Be Loved” in tribute to Phil Everly, and an “In Memoriam” segment that seemed more interested in celebrating the joyous accomplishments of those who had recently passed than in bringing down the proceedings and making everyone miserable. (Here’s hoping the producers of the funeral dirge known as last year’s Emmy Awards were watching.)

The segment was lovely, but where were the CBS fact-checkers? They spelled Cory Monteith’s name wrong!

awards show, broadcast networks, music, tv
3 comments about "Once Again, CBS Gets Its Edge On With The Grammy Awards ".
Check to receive email when comments are posted.
Read more comments >
Next story loading