Chromecast Development Opens To All: Let The Tossing (And Advertising) Begin 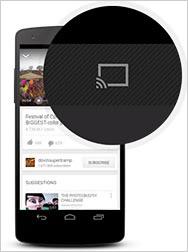 In what could prove to be a pretty big deal, Google’s TV dongle Chromecast finally opened its SDK for general development. After keeping a tight rein on the apps that could throw device and browser experiences to the larger screen, Google announced late yesterday that it was releasing the Chromecast SDK to all developers for connecting their Android and iOS apps to the Chromecast device.

What is interesting about the open SDK for Chromecast is the creative use of the two screens it inspires. Throwing video to the TV from a device is the natural first impulse here. But the Chromecast model allows for developing custom “receiver” app experiences on the TV screen that are more than just mirrors of the device app experience. I presume this is how we will see unique two-screen gaming experiences. The receiver app essentially puts a Web app on the TV.

There is something more than media-throwing at work here. I think. We should start seeing developers play with new concepts of two-screen interactivity and content.

The other interesting aspect of the Chromecast model is how it potentially extends the existing Android ad ecosystem. “As more developers build apps for Chromecast, an influx of connected TV ad inventory will open up,” says Gabriel Cheng, director of strategy at M&C Saatchi Mobile. “I’m sure Google will allow this to be bought programmatically the same way AdWords are.”

The genius of the Google Chromecast model is its dirt-cheap pricing and sheer simplicity. Moving most of the processing and navigation shored for the connected TV experience to the device or browser is a great innovation in dual-screen design. It achieves much of the most important ambitions of the original Google TV vision without the expense and complexity.