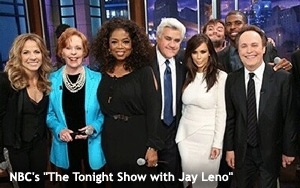 I'm not sure what I was expecting from Jay Leno's final night as host of “The Tonight Show,” but it wasn't what we got: An hour filled with big laughs, great music and strong emotions, with a show-stopping performance at its center that is best described as a once-in-a-lifetime effort by an unlikely mix of famous people, all on hand to bid Leno an unforgettable farewell.

The heartfelt and frequently very funny monologue by and conversation with Billy Crystal -- Leno's first guest way back in May 1992, returning as one of his last -- and the songs by Garth Brooks were just right for the occasion. Indeed, Brooks was the perfect choice as musical guest on so momentous an occasion -- given Leno's huge popularity outside of urban centers, where Brooks reigns as one of the country's top entertainers, although you wouldn't know it from the paltry attention he receives in the mainstream entertainment media. Crystal and Brooks were an amazing combination -- imagine if they teamed up for a charity concert or a run in Vegas.

The hour was framed by Leno's opening monologue during which he took a few final shots at NBC that were funny but never vicious, and an unexpectedly moving final farewell in which he talked about how much his work at NBC had meant to him over the years. He tearfully recalled losing his mother during his first year as host of “Tonight,” his father during his second, and his brother shortly thereafter -- leaving him with no real family except for the show's staff. He signed off with a quote from his predecessor, the immortal Johnny Carson: “I wish you all a heartfelt goodnight,” barely getting the final word out before choking up yet again.

There wasn't a dry eye in the studio or, I like to think, in millions of homes across the land.

For me, the most memorable segment of the hour and the most surprising was the celebrity-filled tuneful farewell in the middle, when Jack Black, Kim Kardashian, Chris Paul, Sheryl Crow, Jim Parsons, Carol Burnett and Oprah Winfrey -- calling themselves the Shut Your Von Trapp Family Singers -- performed a comic variation of the song “So Long, Farewell” from “The Sound of Music.” It began like this: “There's a sad sort of clanging, From the clock in the hall, And the bells in the steeple too; And all the executives that run NBC, Are popping in to say you're through.” (This was a timely NBC jab given its recent outsize success with the live adaptation of “The Sound of Music.”)

Watching that fascinating cluster of famous folks together on one stage got me to thinking yet again that Leno's next act ought to be a once-a-week prime-time talk show inspired and informed by the BBC hit “The Graham Norton Show,” which almost every week does what “Tonight” last night did. Imagine even half of the Shut Your Von Trapp Family Singers hanging out together on a couch for an hour of conversation and music.

When Johnny Carson left “Tonight” his absence was felt for weeks, if not months, often overpowering Leno's efforts to make the show his own. I wonder if Leno will be similarly missed, or if the diversion of NBC's Olympics coverage and the excitement surrounding the arrival of Jimmy Fallon and the show's move back to New York City will somehow eradicate any lingering thoughts of the man who held one of the highest profile positions in television for more than two decades. Our accelerated culture and frantic lifestyles all but guarantee the latter, except amongst his most loyal fans.

Speaking of Leno's devoted fans, most of whom are working or middle-class people, I have to think his jokes about being relieved of his job by his employer really resonated with them. After all, they are the Americans who are still suffering the ravages of a failing economy wrongly identified by the media and by our political leaders as “recovering” when only the well-off and the already rich are once again enjoying financial gains. Leno may be worth more money than most of us can imagine, but he has never brought his image up to the level of his success. He still tirelessly works small comedy clubs that most comics in his position would have abandoned years ago, tinkers with cars on the weekends and is never seen at Hollywood hot spots. Leno is a fabulously wealthy everyman who never stopped being a regular guy; hence the appeal of his many recurring video segments featuring ordinary people, like “Jay Walking” and “Photo Booth.”

True story: A friend in Los Angeles who owned an old Triumph joined a club of Triumph owners that met once a month in random parking lots in the Valley to admire and work on each other's cars. One Saturday Leno happened to drive by, saw the guys at work and pulled over to hang with them for a while and talk about their rides. My friend reported at the time that if Leno had been any more down to earth he would have been underground.

I'm certain he will surface soon.