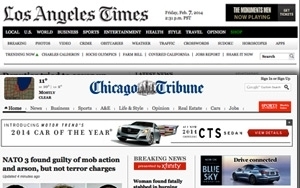 Tribune Co. is planning to spin off its newspaper properties -- including the Los Angeles Times, Chicago Tribune, and Baltimore Sun -- around the middle of this year, according to Bloomberg, which first reported the news, citing unnamed sources familiar with the plans.

The mid-year target date should give Tribune Co. enough time to line up a new CEO in case Eddy Hartenstein, currently the publisher of the Los Angeles Times, declines the offer of the top spot after the spinoff is complete.

Hartenstein previously served as head of Tribune Co. until last year, when he was replaced by Peter Liguori. Most observers expect Hartenstein to return as CEO of the newspaper publishing business, while Liguori will continue to lead the newly independent local TV broadcasting business. Hartenstein, however, may yet decide to retire.

The newspaper spinoff is part of a major strategic shift by Tribune, which is distancing itself from the newspaper business to focus on its local TV broadcasting operations, along with cable network WGN America, a stake in the Food Network and online businesses like Classified Ventures and CareerBuilder.

In February 2013, shortly after emerging from a tortuous four-year-long bankruptcy, Tribune put its newspapers on the auction block but later withdrew them, presumably because of a lack of attractive offers. Meanwhile, in July it announced a deal to acquire 19 stations from Local TV Holdings for $2.73 billion, which closed in December. And in November it announced plans to cut around 700 jobs, most of them in the beleaguered publishing division, as it prepares for the spinoff.